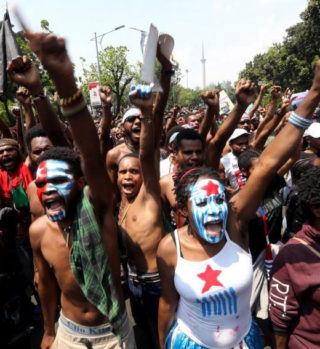 The people of West Papua have been struggling for freedom from Indonesia’s colonial occupation since 1963.

Over 500,000 West Papuan civilians have been killed by Indonesia’s military. Thousands more have been raped, tortured or forcibly disappeared. Racism and discrimination are a daily reality and basic human rights including freedom of speech are outlawed. There are hundreds of West Papuan political prisoners serving lengthy terms for the ‘crime’ of peacefully expressing themselves.

The Indonesian Government have banned international media and human rights organisations from operating in West Papua, ensuring that news about what is happening rarely reaches the outside world.

The Free West Papua Campaign is bringing the story of West Papua to the world and campaigning for freedom and justice in West Papua. It is time to end the violence of the last 50 years and give West Papuans the freedom to decide their own future.

For more information please explore the links on the right.

The following extended report by ABC News gives a good introduction to what is happening in West Papua. For more films see the video section.