One particularly shocking development was an unprecedented increase in mass arrests of peaceful demonstrators. Beginning in late April – coinciding with the launch of the Westminster Declaration in London – West Papuans mobilising in favour of independence, calling for a new referendum, or supporting the United Liberation Movement for West Papua, were subject to mass detainment. Between April 25 and May 2, the Jakarta Legal Aid Institute documented 1,783 “unlawful arrests”.  A further 648 people were arrested from May 28-31 and international attention was garnered when a Spanish tourist was also arrested by Indonesian police. 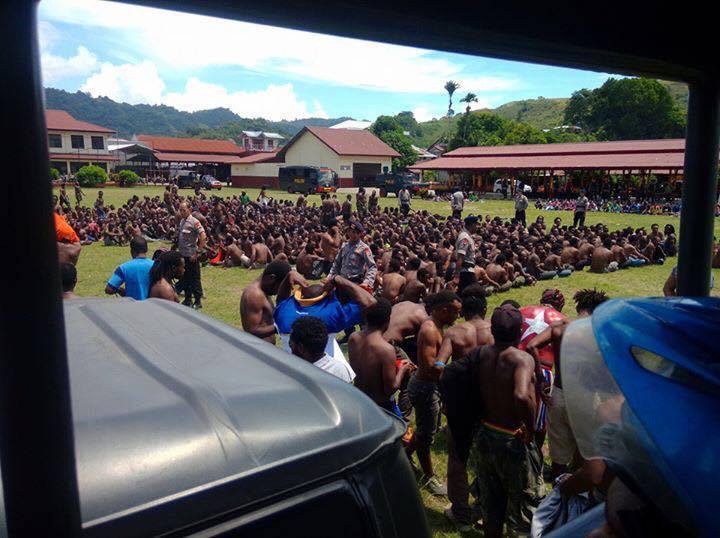 May 2nd. Over 1000 people stripped and arrested by the Indonesian police for supporting the Westminster Declaration for an Internationally Supervised Vote in West Papua

A coalition of monitoring groups documented over 4,000 arrests from April – June. This is more than a 300% increase on the total political arrests in 2015. In total, the Institute for Research, Study and Development of Legal Aid (LP3BH) estimated that 8,000 arrests took place throughout the year.

August 15: Over 100 people were reportedly arrested by Indonesian police in Port Numbay/Jayapura during a non-violent commemoration of the treacherous ‘New York Agreement’ of August 15, 1962 when – without consultation with a single West Papuan – West Papua was officially handed over to Indonesia. Three people were reported shot and four tortured at the demonstration, and one of those arrested was a nine-year-old boy. Footage can be found here.

September 19-20: Rallies across West Papua took place in support of the Pacific Coalition on West Papua and its actions at the UN General Assembly. 21 members of the West Papua National Committee (KNPB) were subject to preventative arrest. Dozens were arrested during the rallies. Footage of the September 19 rallies can be found here.

December 1: 200 protesters were arrested across Papua during rallies for the annual ‘independence day’, commemorating the raising of the Morning Star flag in 1961 by West Papuan leaders. The annual rallies are routinely broken up with violence by Indonesian police.

December 19: Over 500 people, including children, were arrested at demonstrations across West Papua and beyond, including Jakarta, Manado, Ambon, Bandung and Yogyakarta. The demonstrations were commemorating one of the first Indonesian military operations in West Papua, which took place in 1961. Organisers of the demonstrations from KNPB were reportedly brutally beaten after being arrested in Jayapura. Two members of the KNPB, Hosea Yeimo and Ismael Alua, were later charged with ‘rebellion’ and face life imprisonment. Amnesty International issued an urgent action call over their case. Reports suggested that whippings and beatings occurred in numerous cases, and the KNPB HQ was vandalised in Jayapura. 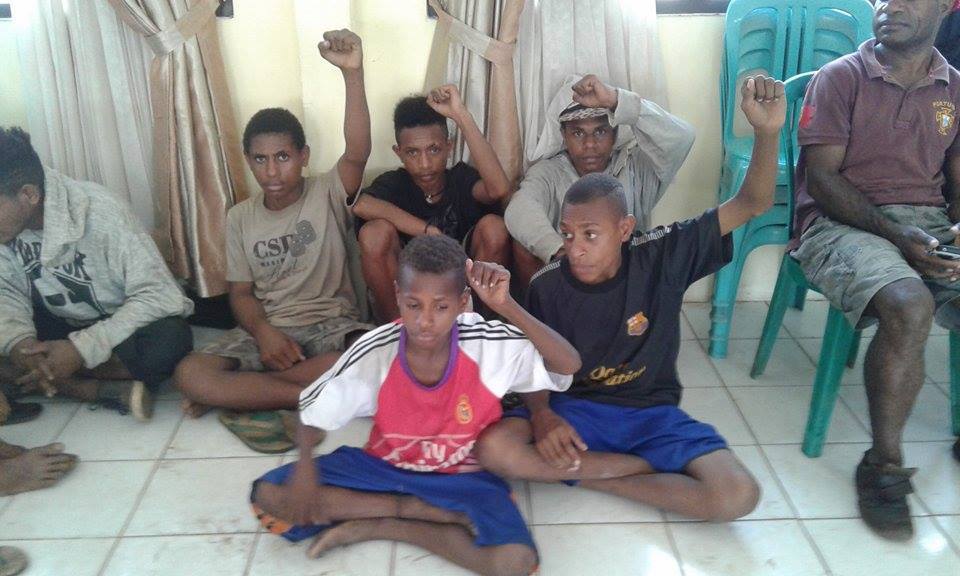 Stephen Itlay: Itlay, a leader of the West Papua National Committee (KNPB), was arrested on April 5th, 2016 during a non-violent prayer meeting in the Kuala Kencana district of West Papua. The gathering was in support of the United Liberation Movement’s bid to become full members of the Melanesian Spearhead Group. Itlay was charged with ‘rebellion’ under Article 106 of the Indonesian Criminal Code and faces life imprisonment. He is still behind bars, and Amnesty International has launched an urgent campaign for his release. Yus Wenda, a colleague of Itlay’s, was also arrested on the same day and charged with ‘mistreating’ an Indonesian police officer after being fired upon.

Four Papuan students charged with treason: Four student activists with the KNPB – William Wim, Emanuel Ukago, Panus Hesegem and Hizkia Meage – were arrested during the December 19 demonstrations and charged with treason. Their detention has been extended into February 2017, and they each face a minimum of 20 years in prison. 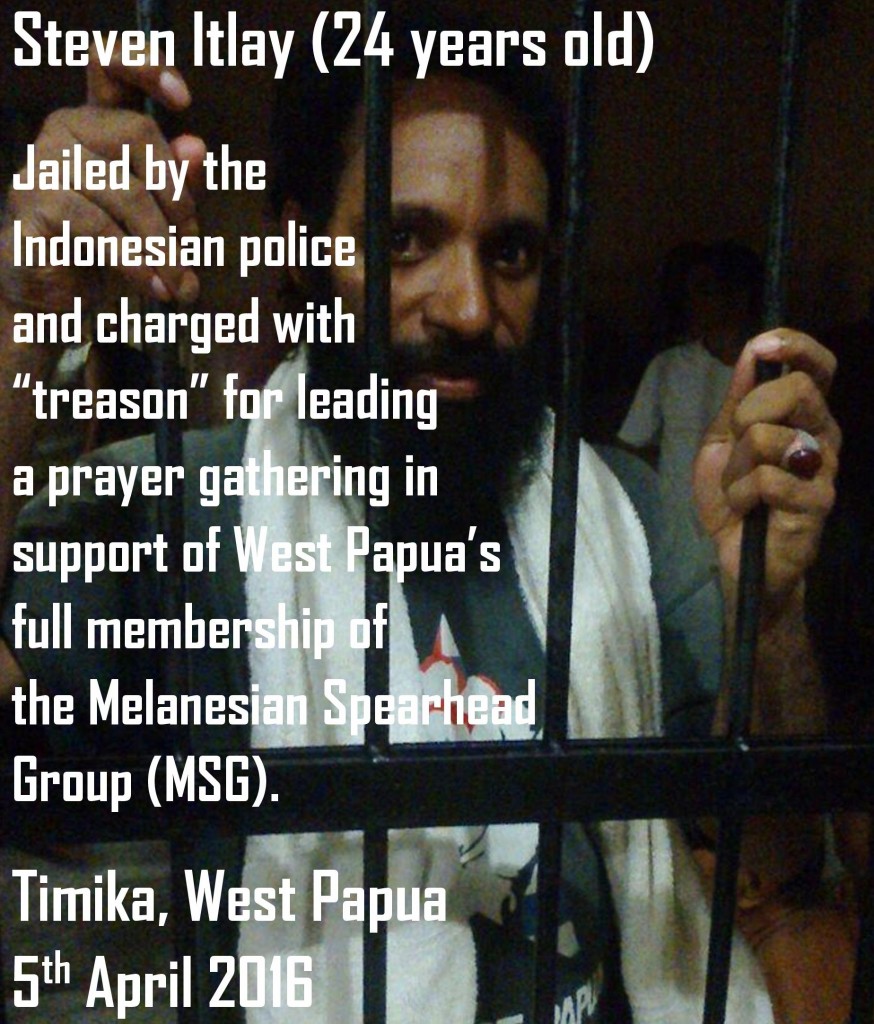 Both Papuan activists and non-politicised civilians continue to be shot dead by Indonesian security forces. Their names are added to the over 500,000 estimated to have been murdered by Indonesian police, military and intelligence since 1963. Arrested West Papuans and those going about their daily business can be subject to beatings and vicious torture at any time. Noted West Papua specialist Budi Hernawan describes torture as an Indonesian “mode of governance” in West Papua.

Otinus Sondegau, August 27: Sondegau, a high school student, was drinking on the street with a friend when Brimob, a notorious armed section of the Indonesian police, chased him through the streets and shot him dead. Such incidents are not uncommon across West Papua, and signify the level of oppression and terror that reigns across the Indonesian-ruled land.

Beating, March 16: A father of two was beaten until he was ‘drenched in blood’ simply for not wearing a helmet whilst taking his children to school. His two children had to watch their father being brutalised for this trivial offense. 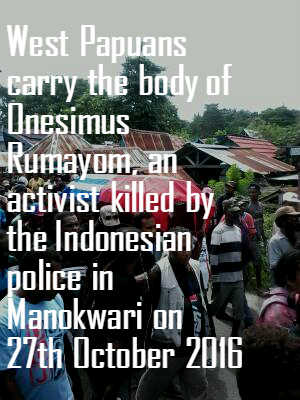 This represents a small sample of the numerous abuses that continued to be meted out by the Indonesian state. Cases such as these rarely, if ever, make it to the Indonesian courts, or even internal police or military investigations. This list also does not touch on issues of structural economic discrimination, rampant racism, chronic underdevelopment, and an urgent health crisis. These issues all stem from the violation of West Papuans’ right to self-determination, which was consummated by Western powers in the 1960s. Until West Papua is a free, independent country able to determine its own destiny, such horrific incidents will continue to occur.

If you want to find more in-depth studies and reports on human rights abuses in West Papua, see here. 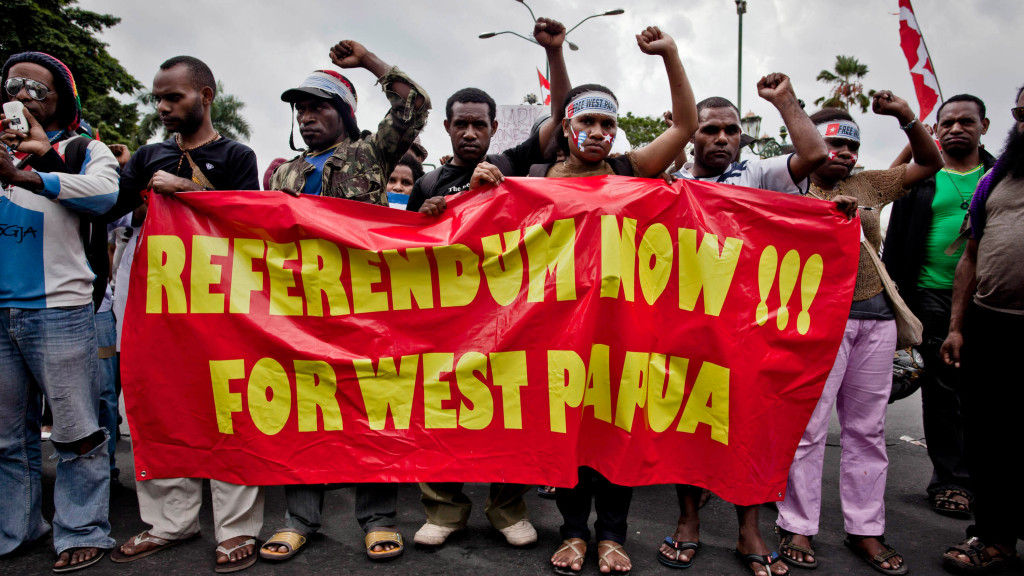 The people of West Papua are calling for an Internationally Supervised Vote (Independence Referendum) to choose their future freedom.

Our fundamental goal is to ensure that the people of West Papua can finally make their own decisions about their future. They have the right to self-determination and are calling for an Internationally Supervised Vote on Independence. Only when this vote (referendum) is held will the people of West Papua finally be free.
We hope you will join us in 2017 and beyond as we continue to raise support to #LetWestPapuaVote!

You can TAKE ACTION by donating, lobbying or spreading the word here.