On May 3rd 2017 Indonesia are hosting World Press Freedom Day, in Jakarta. Only last month Indonesia blacklisted 3 journalists trying to get in to West Papua. There are currently numerous websites being shut down for speaking out about West Papua, and citizen journalists are repeatedly intimidated, arrested and tortured for reporting on the regime.

In a recent interview for the New Internationalist magazine in their fantastic new issue all about West Papua,
Benny Wenda spoke out about the reality of press freedom in West Papua:

In the last month Indonesia has blacklisted three journalists trying to get into West Papua, yet the country is hosting World Press Freedom Day on 3 May. Join West Papuan Independence leader Benny Wenda and thousands of others around the world to shine a light on West Papua. New Internationalist has partnered with the Free West Papua Campaign to publish two testimonies from West Papuan journalist Victor Mambor and Cyril Payen of France 24, who have both faced restrictions within the occupied territory: newint.org/blog/2017/04/27/west-papua-indonesia-world-press-freedom-dayOur May magazine, 'Freedom in sight?: Why the world's forgotten occupation needs you', is dedicated to West Papua. Get a glimpse of what's inside by reading this edition's keynote article: newint.org/features/2017/05/01/morning-star-risingSign the petition for a #FreeWestPapua: bit.ly/swimforwestpapuaFollow the Free West Papua Campaign: facebook.com/freewestpapua

Please take action to draw attention to the irony of World Press Freedom Day being held in Indonesia.

Click on this link to sign up to our thunderclap. It  takes only 2 clicks, and will help West Papua go viral by sending a tweet or post automatically from your account on May 3rd demanding Indonesia allow #Pressfreedom into #WestPapua. It’s really easy.

Please also join our Global Days of Action to help shine a light on West Papua between May 1st & May 3rd. 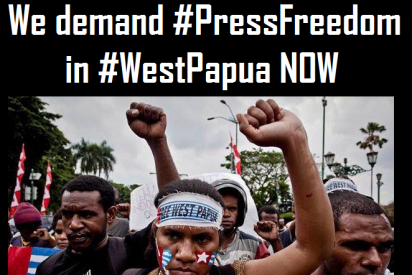