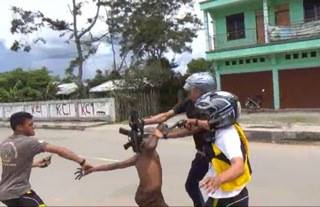 Brutal and horrific footage has emerged from Wamena, West Papua filmed yesterday (scroll down for video). It shows Indonesian police brutally arrest innocent West Papuans and beat them repeatedly with their guns.

This comes just 2 days after Indonesian military supplied militants horrifically tortured 4 innocent KNPB activists in the middle of the street in Jayapura, the capital of West Papua.

This shows an ever increasing wave of violence spreading throughout West Papua.

This is a clear message to Australian Prime Minister Tony Abbott, things in West Papua are NOT “getting better”.

The full video is here:

Urgent action needed – How you can help

Please call or text (SMS) the Head of the Indonesian police in West Papua Tito Karnavia: on +62 8111 61 777 and demand in English or Indonesian that he immediately cease such blatant horrific attacks and all human rights atrocities by his police in illegally Indonesian occupied West Papua.