Stop the attacks on the KNPB 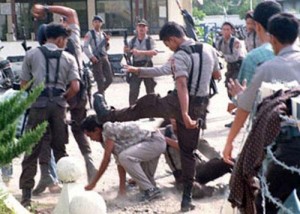 The KNPB is the leading youth movement inside West Papua calling for a new referendum. The KNPB has been falsely branded a terrorist organisation by the Indonesian Government and in 2012, over 30 KNPB student activists were killed by the Indonesian security forces including the Chairman, Mako Tabuni.

Help us call on the Indonesian authorities requesting that they recognise the KNPB as a peaceful organisation with a legitimate right to express their desire for West Papuan independence. The KNPB should be listened to and engaged with, rather than being branded as a terrorist organisation and its members imprisoned or killed.

Email the Indonesian President to stop the attacks on the KNPB

613 people have sent this action

Your message will be sent to:
The President of Indonesia - Joko Widodo
and
Indonesian Embassy London