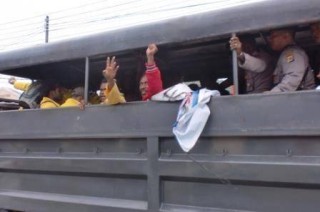 The leader of the West Papuan Student Movement, Yason Ngelia, was arrested yesterday by angry Indonesian Police during a peaceful rally rejecting Papua’s Special Autonomy (Otsus). He is now detained at the Jayapura police station with fifteen other students.  Yason led hundreds of youth and students in front of the Papua Governor’s Office to reject Special Autonomy (Otsus). Yason is a non violent activist.