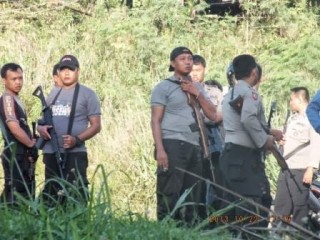 Uniformed and plain clothed military were involved in the attack

Following mass protests throughout West Papua in support of the formation of the all-party parliamentary group for West Papua, the anniversary of the founding of IPWP and a speech at the UN in support of West Papua by the Prime Minister of the Republic of Vanuatu, Papuan students have been terrorised and attacked this morning by members of the Indonesian military and police with some wearing plainclothes.

At 5:15 this morning in Jayapura, West Papua, scores of Indonesian military (TNI) and police marched into the dormitory courtyard of the Cenderawasih University (UNCEN).
With most of the students still sleeping, the military aimed 5 shots at the dormitories and all the students ran out of their rooms in fear with many jumping through the windows to escape the bullets. 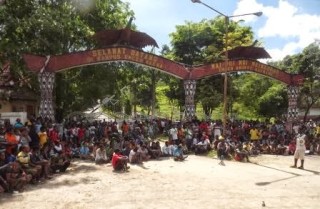 students outside the entrance to Cendrawashi Univesity

Seeing such a brutal attack Chairman of the dormitory, Tanius Komba with Mael Alua and other officials tried to approach the military who continued to fire, but the members of the TNI and police simply threatened to shoot them as well and continued shooting into a dormitory.

TNI members continued to shoot at the building 9 times but fortunately no students were hit.
Up to 7 members of the uniformed military and police then entered the dormitory rooms with an extra 5 members of plainclothes military thugs and 2 plainclothes police thugs.

Amid loud screaming, the military and police then forcibly herded all the students into the courtyard.

After generating as much terror and panic as this with many university officials now starting to come into the courtyard, the military and police responsible for the attack, then fled the scene, leaving a sense of intense fear and shock to all those who witnessed the brutal attack.

Immediate protests against this brutality

At 6:00, students gathered in the courtyard began to blockade themselves off and light fires to keep to police and military away.

They then started to protest against this act of brutality with many speeches by students and demands that the military and police immediately withdraw all forces from the university area.

At 10:15, the peaceful protest was then dispersed by the Indonesian police.

Urgent action needed- How you can help

Please call or text (SMS) Mr. Erfi Triassunu Commander of Regional Military Command XVII Cendrawasih (Kemiliteran Daerah Papua / Kodam Papua) Jl. Polimak atas Jayapura Provinsi Papua INDONESIA Fax: +62 967 533763 the Head of the Indonesian police in West Papua Tito Karnavia: on+62 811 161 777 or the Jayapura police chief: +62 852 4466 7949 and demand in English or Indonesian that they immediately cease such blatant acts of terror, intimidation and all human rights atrocities by their police and military in illegally Indonesian occupied West Papua.
Let them know that the world is watching them and their crimes against humanity and those of their fellow police and military personnel.

Please help to share this article and images throughout the internet and the world to let the world know what is really happening to the people of West Papua.