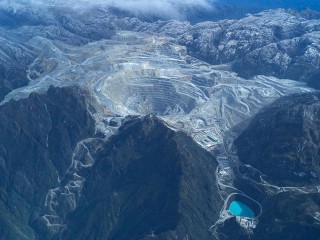 9 Foreign tourists have been detained by the Indonesian military for hiking into the area of the Grasberg Mine in West Papua, (seen here) the largest goldmine in the world which all tourists are banned from getting even close to.

The events as they happened

The hikers were on their way to the Carstenz Pyramid, (also known as Puncak Jaya) the highest mountain in West Papua and had reportedly got lost when they were stopped by the Indonesian military guards who are paid millions of dollars every year by the mining company Freeport-McMoRan to kill or evict local Papuans and stop tourists from entering the region.

Those detained have been confirmed as:

They were told by armed Indonesian security forces that they were not allowed near the area “for safety reasons.” 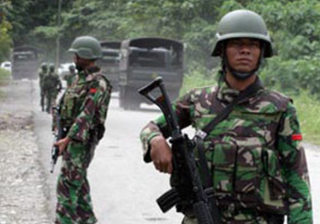 Indonesian military on patrol near the mine

Military Commander XVII/Cenderawasih Major General (Maj.) TNI Christian Zebua claimed that “no one is being held hostage” by Freeport Indonesia.

“Nobody is being held hostage. They were trespassing in the Freeport area. There is a new regulation that forbids people from passing through the company’s operations area to get to Carstensz,” he explained.

According to the Commander, this hiking group got lost and entered the Freeport operations area; therefore, security personnel had to detain them.

Notes about the Grasberg Mine and the Indonesian military

Freeport, in complete cohesion with the Indonesian military is so destructive that the mine itself pumps over 238,000 tonnes of toxic waste into the local river system EVERY DAY and before it opened, military have killed and forcibly displaced thousands of local tribes people just to make way for the mine.

It is with cases such as this which proves that West Papua still is to this day, cut off from the outside world by the Indonesian military.

Help people to learn the truth about what is really happening in the Grasberg mine and all over West Papua.
After 50 years of international pressure on the Indonesian to allow foreign journalists into West Papua, this month the Governor of Papua Lukas Enembe said he would allow foreign journalists to enter for the first time. Although his comments were quickly ignored by the Indonesian military and the central Indonesian government, it does show that change can happen very quickly over such issues.

Please sign this new Avaaz petition here, calling upon Indonesia for immediate freedom of the press in West Papua a cessation of the killings against the West Papuan people and to allow foreign journalists into West Papua and that they be free from harassment and intimidation by Indonesian troops.

If Indonesia has nothing to hide in West Papua, they should welcome tourists and foreign journalists anywhere especially at the mine which (the Indonesian government claims) is “making West Papua more rich” despite the fact that all proceeds are channelled to Jakarta.