AHRC publishes report on massacre of over 4,000 West Papuans 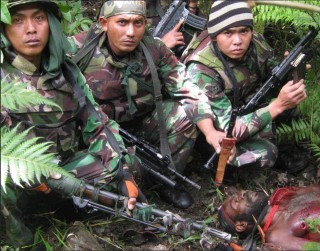 You can watch ABC’s video news coverage of this shocking new report here
The Atrocities
The AHRC believes that the total death toll of West Papuans resulting from this one Indonesian military operation in just one year could be well over 10,000 people.
The report says Papuans in the Central Highlands were victims of napalm bombing and indiscriminate shooting from the air, sometimes from aircraft supplied to the Indonesian military by Australia and the US.
In one reported incident, villagers in the Bolakme area were told they would be receiving aerial aid from Australia, only to be bombed by American-supplied planes.
The report also contains graphic details of independence supporters being burned alive, boiled alive, and being forced to perform sexual acts in public.
In other incidents, the report claims women and children were targeted: children’s heads were cut off, women were raped and had their breasts cut off and internal organs pulled out. 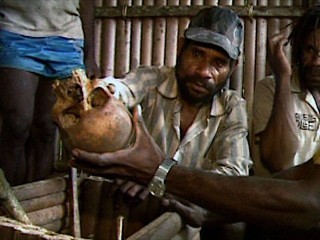 A spokesman for the Asian Human Rights Commission Basil Fernando says some of those named in the report are still in positions of power within the Indonesian military.
We join the AHRC in calling for an ad hoc human rights court to be set up to hear the allegations and try those responsible, as well as the establishment of a truth commission.
We also join them in calling on the international community to demand the Indonesian government be held to account for human rights violations in Papua.
WHAT CAN YOU DO?
Please help to share this article and images throughout the internet and the world to let the world know what is really happening to the people of West Papua.
Atrocities such as this will only stop happening when the outside world begins to see the horror and oppression that all West Papuans, including children continue to face on a daily basis under Indonesian military rule.
Please support the work of the Free West Papua Campaign.
We are a voluntary organisation and every donation we receive is used to help free the people of West Papua.
Visit the take action page of our website and also consider donating to the campaign.
https://www.freewestpapua.org/take-action/
https://www.freewestpapua.org/go/360
This genocide will not stop until West Papua is fully free and independent. Please contact Mr. Erfi Triassunu Commander of Regional Military Command XVII Cendrawasih (Kemiliteran Daerah Papua / Kodam Papua) Jl. Polimak atas Jayapura Provinsi Papua
INDONESIA Fax: +62 967 533763,
ND Head of Police in Papua – Tito Karnavia:
+62811161777
and ask them to immediately cease such horrific military operations such as these which continue to this day.Not only have literally none of those responsible for these war crimes been held accountable for them, they are still committing the very same war crimes to this day.
« Previous post
Next post »