In the ongoing Indonesian military operations in the Tembagapura district of West Papua, at least 1 West Papuan civilian has been killed and several others have been wounded by Indonesian soldiers. 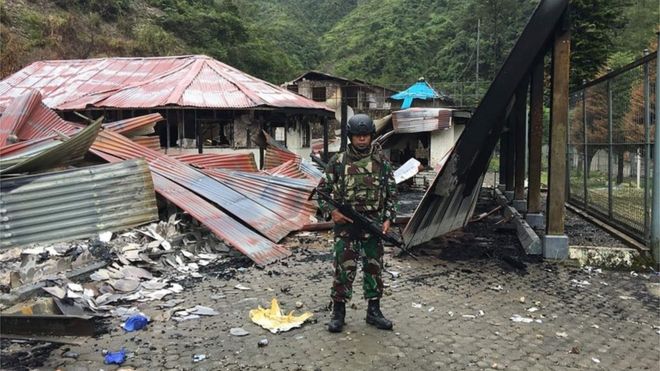 Indonesian soldier standing in front of a burned down West Papuan house in the Tembagapura district. Photo: AFP/GETTY IMAGES

Speaking to BBC Indonesia, Pastor Deserius Adii in the Banti village church said that  Timotius Omabak was shot dead and three others were wounded when the Indonesian military burst into the building and opened fire.

“I think we must give access to humanitarian workers, human rights defenders who are with human rights institutions including Komnas HAM [National Human Rights Commission], in order to conduct an investigation”, said Yan.

Indonesian soldier in a village in the Tembagapura district. Photo: Supplied.

He highlighted the fact that the dissemination of information on West Papua is dominated by senior military and police officers, including allegations that civilians are falling victim because pro-independence groups are using people as human shields.

“I just don’t see that our sisters and brothers who are categorised by the government as armed civilian groups use [people as] shields. Because none of the physical evidence is obtained in a balanced manner”, said Yan.

“We hear a lot of talk from senior military and police officers. But we never get information from journalists who interview groups who oppose the state so we can’t get information that is balanced”, he added.

In the lead up to World Press Freedom Day 2018, it is ever more pressing that the Indonesian government immediately allow foreign journalists into West Papua.