Below is a message from Ash Brennan, the founder of Rockin’ for West Papua, a series of peace concerts held around the world for West Papua every year. He expresses his thanks and gratitude on behalf of the Free West Papua Campaign to all those who helped this all these incredible global events take place for West Papua.

Rockin’ for West Papua.. 33 Years in the making. 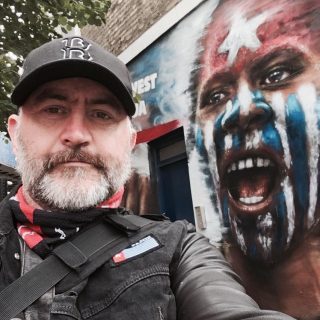 You are the product of the people around you’ I think someone might have said one day, maybe, but anyway, I firmly believe it to be true.Especially in the case of Rockin for West Papua.

Everybody who played a part, Organisers, bands, venues, punters, generous businesses, can all take credit in what is possibly the greatest achievement of our lives.

With the delivery of the petition to the UN in New York, after 56 years of oppression and genocide, the people of West Papua now have some hope of freedom. Funds raised by R4WP played a vital role in making this most significant moment in the West Papuan struggle, possible. R4WP will continue to support the ULMWP and the people of West Papua. However, with the light we have helped shine on the human rights abuses and genocide in West Papua, let’s hope our support isn’t needed for too much longer!

On a personal note, Sunday nights show at Frankies in Sydney felt like a celebration of what we have achieved and you couldn’t wipe the smile from my face.

It was one of the happiest and proudest moments of my life.
Whilst watching my mates from Blackbreaks on stage, I looked around at my wife, my friends, WP supporters, punters and I thought about what had brought us all to this point. Not just those in the room but R4WP crew around the world.

Believe it or not, R4WP started 33 years ago when I purchased my very first bass guitar.

As I made the first out of tune sound on my new axe, I dreamt about how far it could take me.
As I started playing, those 4 strings guided me through life.
They taught me what was right and what was wrong.
They taught me to think for myself and think outside the square.
They gave me experiences and life long friends that only music could give.
They also gave me a big heart.
Those 4 strings also put West Papua on the map for me.
So when I wanted to help the people of West Papua, I called on all the friends, and experiences those 4 strings had brought me, to create Rockin for West Papua.
Whether it was 4 strings 6 strings, keys, horns,pipes,skins, decks or even if you were just a fan, all of our journeys intersected on the weekend, to make a difference.
I believe as a movement we have achieved something truly special and something that we can be proud of for the rest of our lives.
And I still can’t wipe the smile from my face.
#MusicIsAWeapon
Ash Brennan
Rockin for West Papua
Free West Papua Campaign Australia
Director ‘Punks for West Papua’ – The Documentary
« Previous post
Next post »