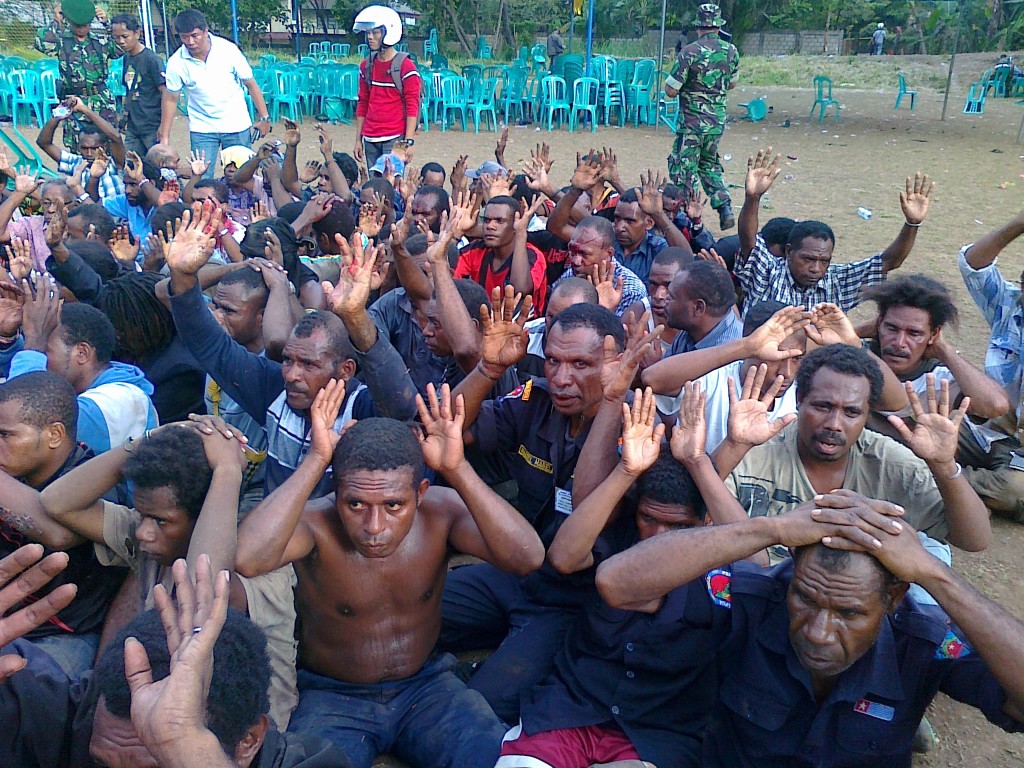 The Indonesian president, Joko ‘Jokowi’ Widodo, is desperate to keep hidden Indonesia’s dark, dirty secret: its brutal 50-year war in its easternmost provinces. Here are five things you should know about Indonesian rule in West Papua:

1. It is one of the world’s longest-running military occupations

Indonesia seized West Papua, the western half of the island of New Guinea, in 1963, shortly after the Dutch colonists pulled out. Political parties were immediately banned, nascent Papuan nationalism crushed, and tens of thousands of troops, police and special forces flooded in. In 1969 a UN-supervised sham referendum was held, and just over a thousand hand-picked representatives were bribed, cajoled and threatened into voting in favour of Indonesian rule.

A police state has shackled the vast region ever since, battling a low-level tribal insurgency and suppressing independence aspirations with such vigour that raising the Papuan national flag can land you 15 years in prison.

Although international media and NGOs have been nearly uniformly banned from the territory for decades, most observers estimate that over 100,000 native Papuans have been killed since the 1960s – at least 10% of the population. With echoes of Indonesia’s rule in East Timor, which eliminated around one third of the population, a 2004 report from Yale Law School concluded: “[There is] a strong indication that the Indonesian government has committed genocide against the West Papuans.” Several other scholars have reached a similar conclusion.

Reports of barbarous killings regularly emerge, and one study recently described torture as a ‘mode of governance’ in the provinces. The abuse tends to be intertwined with projects of resource extraction and ‘transmigration’ – the effort (formerly supported by the World Bank) to shuttle hundreds of thousands of landless Indonesian peasants from the rest of Indonesia into West Papua.

During a military campaign in the early 1980s, the Indonesian army ran under the slogan, ‘Let the rats run into the jungle so that the chickens can breed in the coop’. In practice, this meant wiping out Papuan villages and bringing in ethnic Indonesians to work on economic projects like Freeport’s giant Grasberg gold and copper mine, which has been accused of ‘ecocide‘ and dumps over 200,000 tonnes of tailings in local river systems every day. The influx of Indonesians has left the original inhabitants a near-minority in the land, struggling to maintain their culture and often nomadic way of life. An Indonesian minister once in charge of the transmigration programme has stated: “The different ethnic groups will in the long run disappear because of integration, and there will be one kind of man.”

Even the pro-Indonesian US ambassador admitted in the late 1960s that “possibly 85% to 90%” of West Papuans “are in sympathy with the Free Papua cause.” Paul Kingsnorth, an investigative reporter who travelled the region in the early 2000s, described the independence campaign as a “broad-based social movement, which almost everyone in West Papua, if you get them alone, will admit to belonging.”

Nothing speaks to this more than the long campaign of armed resistance and civil disobedience against the Indonesian state. In 2011, documents leaked from the Indonesian army detailed a “longstanding guerrilla network that is relatively well organised and which operates across the whole country.” A recent book describes the non-violent wing of the movement as ‘savvy and sophisticated’, and notes that “Papuans in 2015 desire freedom as much, if not more, than Papuans who desired freedom in 1963.”

Most West Papuans consider themselves Melanesian, with more in common with darker-skinned Pacific populations than the Indonesians who often treat them as racially inferior. Culturally, linguistically, ethnically – Papuans have little in common with Indonesians. For the overwhelming majority, nothing short of independence will suffice.

4. The Indonesian state is terrified of international exposure

Alongside barring international media from West Papua, Indonesia runs counter-intelligence operations overseas to neutralise the international independence movement, surveilling and harassing campaigners based in Australia and elsewhere. Leaked military documents bemoan the success activists have had in “propagating the issue of severe human rights violations in Papua,” and Indonesia has been working hard to ensure exiled Papuan representatives are barred from regional Pacific organisations. Foreign visitors in the provinces are placed under routine surveillance, and Indonesian concern at the opening of the Free West Papua campaign office in Oxford even prompted the British ambassador in Jakarta to publicly distance himself from independence aspirations.

5. Britain & the West have supported Indonesia’s occupation for decades

Britain’s historic alliance with the Indonesian state dates primarily to General Suharto’s bloody coup in 1965-6. In the midst of the slaughter of at least 500,000 suspected members of the Indonesian Communist Party – which British officials gleefully described as a ‘ruthless terror’ – the Foreign Office argued that “the Generals are going to need all the help they can get”, releasing £1m in aid and granting the export of military equipment. The Indonesian left was duly decimated – never to recover – and the pro-Western Suharto was firmly in control.

Since then, Britain’s support for Indonesian rule in West Papua has been unwavering. Privately recognising the ‘savage’ nature of Indonesian rule, publicly officials have voted to legitimate Indonesian rule at the UN and pledged support for Indonesia’s ‘territorial integrity’. Until the late 90s, the UK was one of Indonesia’s primary arms suppliers. Kopassus, the Indonesian special forces, have been trained and armed by the UK, US and Australia, despite a well-documented record of horrific human rights abuse in Papua. Britain funds and trains Detachment 88, the Indonesian counter-terrorism unit accused of massacres in Papua’s central highlands.

While in opposition, David Cameron described the situation in Papua as ‘terrible’; once in power, he headed to Jakarta with representatives from BAE Systems in tow. By contrast, Jeremy Corbyn is a long-time supporter of the Papuan struggle – another example of his “direct and open challenge to the British system of government of international alliances”, as Peter Oborne described it. It remains to be seen whether or not he will be able to dislodge the British establishment’s ossified support for the Indonesian state if he comes to power.

This is an edited article published on the Peter Tatchell Foundation, originally published by Novara Media: www.novaramedia.com@novaramedia