Due to a lack of initial confirmation of details, this story has been published now but the events described below took place on 9th August 2017.

On 9th August, 1 West Papuan youth Theo Cakatem was killed and 2 others were shot by the Indonesian military in Port Poamako near the town of Timika, West Papua. 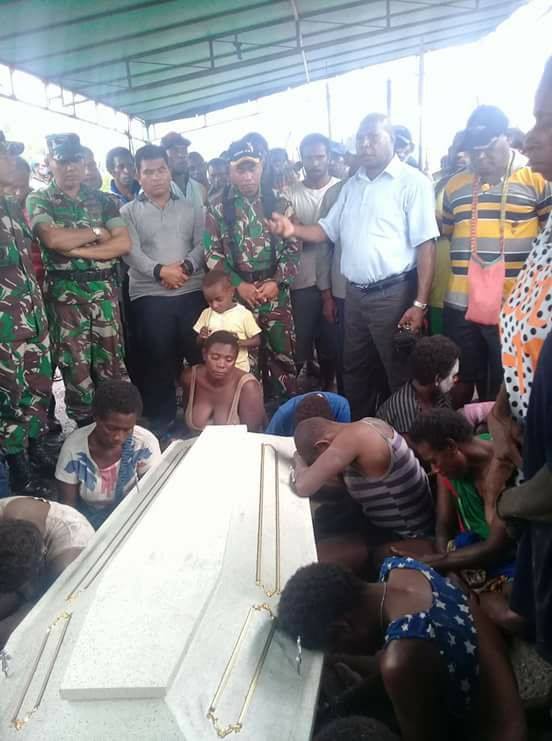 Indonesian military watch the family of Theo grieve over his body during his funeral. Photo: (Melanie – Suara Papua)

According to Suara Papua, the shooting came after West Papuan people were protesting against Indonesian migrant fishermen exploiting the local catch in traditional areas.

Radio New Zealand reports: ‘According to the Timika Diocese report, a melee broke out when one of the migrant fishers’ leaders, a municipal policeman, assaulted one of the indigenous people.

‘In response to the fracas, a member of the intelligence unit of Military Command, Chief Brigadier Yusuf Salasar, began shooting from the police post.’

West Papuan youth Theo Cakatem (20 years old) was shot 4 times and died. 2 other people were also shot and wounded. Indonesian soldiers then attended his funeral in full military uniform as his family grieved over his death.

The Free West Papua Campaign fully condemns the brutal killing of Theo Cakatem and the shooting of others. It is an outrage that the Indonesian government has not been brought to account for such ongoing killings, especially as this one took place just 8 days after up to 17 West Papuan people, including children were shot and 1 killed by the Indonesian police.

Please share this urgent news with all of your contacts, media networks and friends. The people of West Papua need international help urgently to put an end to this brutal occupation.