West Papuan father tortured and shot by the Indonesian military

We have received urgent information that West Papuan father David Tarko was brutally tortured and shot by the Indonesian military in Maribu village near the capital city of Port Numbay/Jayapura. The Indonesian military reportedly raided his village after he was accused of supporting West Papuan Independence activists, beat him up and then shot him. He was then taken to the Bhayangkara police hospital and has not received proper treatment for his broken leg and other injuries. 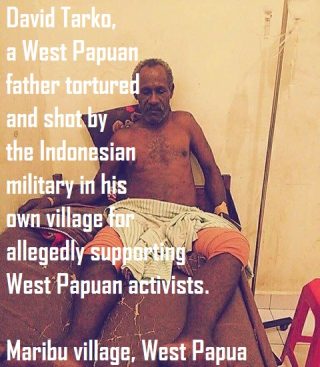 It is reported that David Tarko was tortured and shot on 17th January but remains in hospital to this day.

We fully condemn this brutal attack on David, an innocent elder from West Papua and we appeal to the International Community to please share this information and Take Action for West Papua.
There must be justice for David Tarko and all West Papuan victims of human rights abuses.