We have recently been discussing your ongoing courageous struggle to liberate yourselves from more than 100 years of occupation, first by the Netherlands, briefly and brutally by Japan during World War II, and now by Indonesia. In that regard, we would each like to share a brief message with you, our friends from West Papua.

From James: I have been very impressed with the information gleaned from my son Robert Burrowes after his recent meeting in Brisbane with your leaders Octovianus Mote, Benny Wenda, Jacob Rumbiak and Rex Rumakiek of the United Liberation Movement for West Papua.

The work and dedication you have been devoting to the cause of freedom for West Papua has inspired me to recall my own experience withsome of your ancestors during my 4 years with the Australian Imperial Force (AIF) during World War II, which included 21-and-a-half years as a coastwatcher. Ten months of this time was spent in enemy-held territory as a signaller.

I am 92 years old now, but in those days from 1942 to 1945 I was Sergeant James Burrowes VX136343 in ‘M’ Special Unit of the Allied Intelligence Bureau, known as the ‘Coastwatchers’. Our intelligence role for the war effort was described by Admiral Halsey, Commander of the US 7th Fleet, in these words:

‘Without the Coastwatchers, the Pacific War would not have been won!’

Therefore, in this context, I would like to briefly relate the contribution of some of your Papuan ancestors who were also coastwatchers, assisting and being part of parties infiltrated into Japanese-held territory.

Those I can name include Papuans known to us as Yali, Mas, Buka and Mariba although I can name many others such as Golpak, his son Kaole, Yauwika, Rayman and Ishmael. Some, including Sgt-Major Simogun, are famous and were duly honoured with the British Empire Medal and/or Loyal Service Medal for their fighting service. I mention the first four named for a specific reason.

I recall one very notable incident when eleven coastwatchers paddled ashore in rubber crafts from a submarine at Hollandia (now Jayapura, the capital of West Papua) only to be wrecked by the surf, losing most of their equipment, before being ambushed by the Japanese. Five coastwatchers (including Papuans Mas and Buka) were killed and those remaining (which included the Papuans Yali and Mariba and the Indonesian known as Lancelot) somehow managed to escape and, after incredible hardship, later rejoined allied forces.

On a personal note, I am lucky to be here today. I was selected to go on that Hollandia venture but, at the last minute, the signaller Jack Bunning replaced me after recovering from sickness. He was one of the men killed! I am also lucky to be one of the handful of Australian coastwatchers still alive to tell our story.

I would be thrilled if any survivor or relative of any of the Papuans named is still able to connect with this experience from some 72 years ago.

I have included a photo of the Hollandia party (in which you will see the four Papuans), a photo of Sgt-Major Simogun, and two photos of myself from way back then and now.

I sincerely wish you the very best of success in your long-term struggle for independence.

You helped us to preserve the independence of Australia from Japan.
Best regards, Jim Burrowes 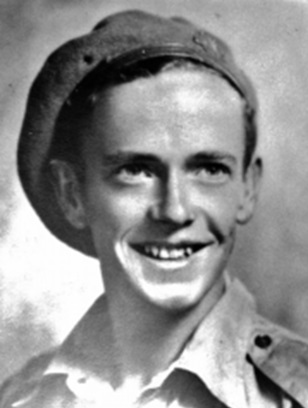 James Burrowes, (at the time) an World War II Veteran who fought alongside West Papuans to keep Australia and the region free of Japanese occupation. 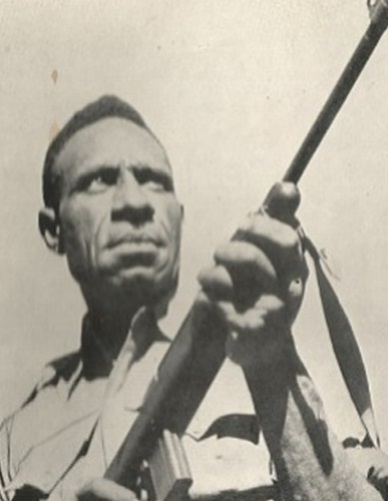 Sgt-Major Simogun, was a famous West Papuan soldier at the time and was honoured with the British Empire Medal and/or Loyal Service Medal for their fighting service. 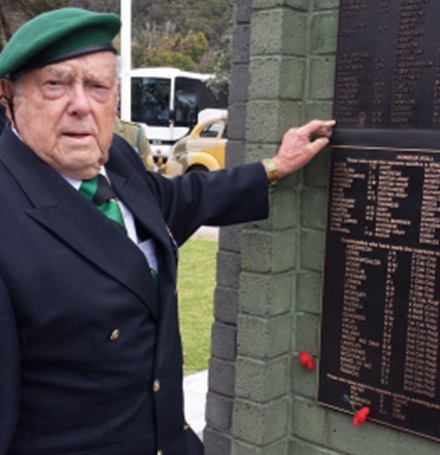 From Robert: When I was a child, each year my father would take me to the Shrine of Remembrance in Melbourne at the beginning of July. I would listen to an old man talk about the sinking of the Montevideo Maru, a Japanese prisoner of war ship that was sunk during World War II, killing all of the 1,053 Australian prisoners of war on board.

I would watch my aunt crying as this story was told.

One of the prisoners on this ship was my father’s older brother, Robert (Bob), who had been captured at Rabaul during the Japanese invasion on 22 January 1942. Bob was a member of the 34th Fortress Engineers of the Australian Imperial Force and had been responsible for installing guns at Praed Point in Rabaul Harbour.

Apart from his older brother, my father also lost his twin brother Thomas (Tom) during the war. Tom was a member of the RAAF’s 100 Squadron and the Beaufort Bomber on which he was a wireless airgunner was shot down over Rabaul on his first mission on 14 December 1943.

My childhood is dotted with memories of my uncles: wearing Bob’s war medals to school on ANZAC Day, going to the Shrine of Remembrance each year, and listening on those rare occasions when Dad talked about his brothers.

Sometimes, when asked, Dad would also talk about his own experience during the war. He was a member of ‘M’ Special Unit, a coastwatcher operating behind enemy lines in Japanese-occupied New Guinea.

Whenever he talked about his experience and the efforts of fellow coastwatchers, Dad would invariably mention their heavy reliance on the Papuans who also served as coastwatchers. In his words: ‘Without them there would have been NO Coastwatchers as they were the ones guiding us, carrying all our gear, building our thatched shelter, cooking, protecting us as sentries – you name it.’

In 1966, the year I turned 14, I decided that I would devote my life to working to end human violence. This is more than a life passion: It is why I live.

One of the things that I have learned is that we can use thoughtfully applied nonviolent strategy to defeat occupying powers. I wrote a book on how to do this. See The Strategy of Nonviolent Defense: A Gandhian Approach. http://www.sunypress.edu/p-2176-the-strategy-of-nonviolent-defe.aspx

Just as Papuan ancestors helped my father and fellow coastwatchers to play a key role in defeating an occupying power, it is now my duty and great privilege to help the people of West Papua to defeat another one.

[James Burrowes served in New Guinea during World War II. Jim’s war service and the death of his two brothers inspired Jim’s son Robert to seek and apply nonviolent ways to resolve conflict. Robert’s email address is flametree@riseup.net and his website is at http://robertjburrowes.wordpress.com]