Following an Indonesian military and police raid on Wananpompi village on Yapen Island in West Papua, shocking details have emerged of a massacre of West Papuan villagers. According to the human rights organisation Tapol, as well as the West Papua National Committee (KNPB), 2 West Papuan people were shot dead, 2 more tortured to death and 8 others seriously injured. The villagers were peacefully commemorating the 54th Anniversary of West Papua National Day and the West Papuan flag was raised followed by a prayer service. Suddenly, the Indonesian military and police arrived and opened fire upon the villagers, shooting 12 people.

A human rights report by the KNPB has detailed the names of the victims as well as the horrific injuries they suffered from the attack.

Here are some of those details 8. Anton Toni Runaweri (43 years old) was shot in the side of his neck, penetrating his  jaw and mouth, fracturing his jaw and leaving him unable to eat. He is in critical condition and is being referred to Surabaya to get serious medical treatment.

9. Sakarias Torobi (35 years old) was shot in the left leg leaving his leg bone shattered and broken and another bullet lodged in. On 6th December, he received surgery in Biak.

10. Alius Karimati Alius Karimati (45 years old) was shot through his arm by the Indonesian Police Mobile Brigade as he was about to run into the forest. He screamed in pain but was not referred to Biak for treatment.

11. Daud Luther Ayomi (53 years old) was shot in the arm and shoulder.
His arm was broken and a bullet was lodged deep into his shoulder. He was sent to Biak hospital for medical treatment of his serious injuries.

12. Pilemon Ayomi (49 years old) was shot in the arm leaving his bones broken. He was also sent to Biak hospital for his serious injuries. 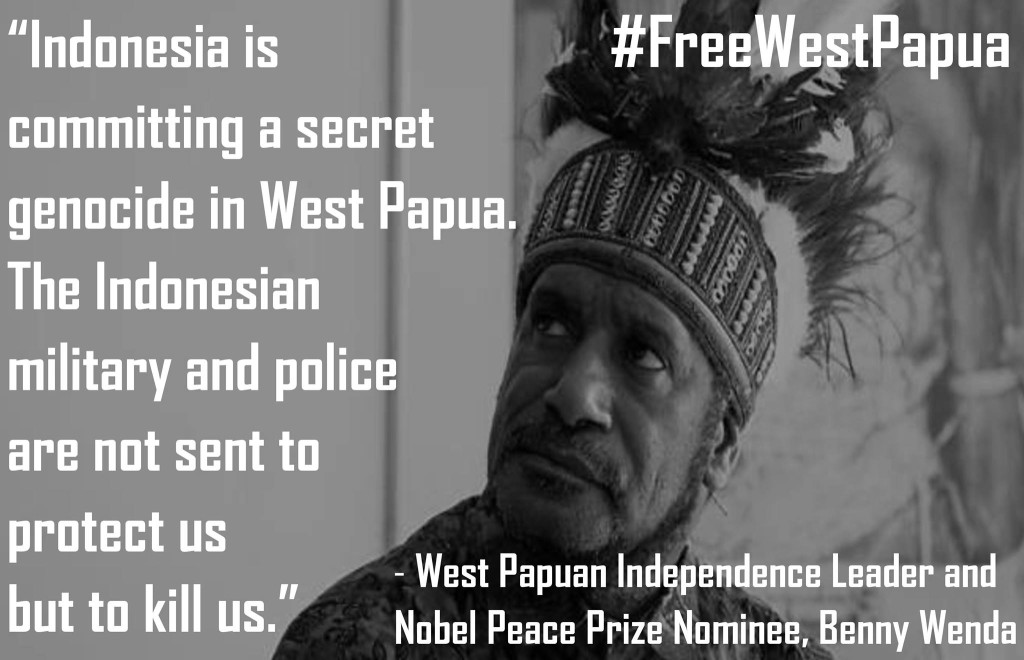 “It breaks my heart every time I hear such news of yet another human rights atrocity committed by the Indonesian authorities against my people. How can the raising of a national flag justify the shooting and killing of innocent people?

“Therefore on behalf of my people, I call upon the Melanesian Spearhead Group, the Pacific Islands Forum and all relevant bodies to please help to from such a human rights fact-finding mission and to discover and help to stop the ongoing genocide against Melanesian Pacific Islanders to this day.

“And I appeal to you, people of the world to please look at the terrible situation my people are facing. In 30 or 40 years, there may be no more West Papuans left in West Papua. As human beings we cannot leave our fellow human beings to perish in this way. The world needs to know about this 21st Century genocide in occupied West Papua.”

To find out how you can Take Action against the secret genocide in occupied West Papua, please click on the link below