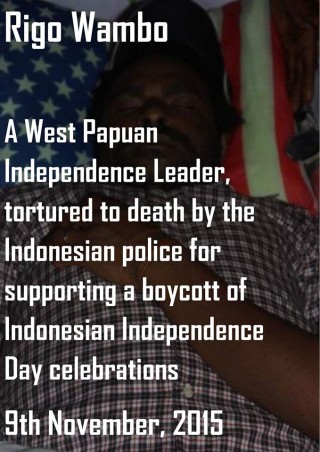 We are very sorry to learn that West Papuan Independence Leader Rigo Wambo reportedly died today after being tortured by the Indonesian police when he supported a West Papua-wide boycott of Indoensian Independence Celebrations.

Rigo Wambo was the Chairperson of the West Papua National Committee [KNPB] in the Central Mamberamo Region and we have recieved reports that on 17th August (Indonesian Independence Day), Rigo was arrested and tortured by the Indonesian police for his role in supporting the boycott. He was tortured until his body was battered and was seriously ill ever since.

After 3 months, he was finally taken from this remote part of West Papua to the Capital City Port Numbay/Jayapura for treatment.
His family brought him to the Abepura hospital but there was no change and today he died in hospital at around 17:00, West Papua time.

This information was reported by the West Papua National Committee and a full chronology is expected to come soon. We cannot yet confirm the exact details surrounding the death but this appears to be yet another case of Indonesian state brutality against the people of West Papua, just for refusing to be Indonesian. He was tortured until he died only for standing up to the Indonesian government and he never let them take his true West Papuan identity away from him.

Over 500,000 people have died in this cold genocide and we are appealing to people, organisations and governments everywhere to please help by acting to stop these atrocities in occupied West Papua.

Rest in Peace brother Rigo Wambo, in your vision and the vision of all West Papuans, we will continue to struggle until West Papua is finally Independent and Free.