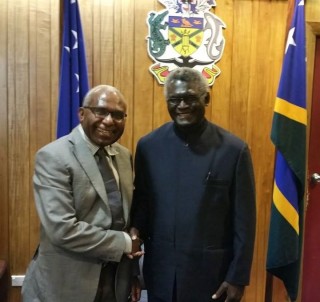 We are very happy to report that the Prime Minister of the Solomon Islands, Hon Manasseh Sogavare has pledged his support for the United Liberation Movement for West Papua (ULMWP) joining the regional group, the Pacific Islands Forum.

In a meeting on Friday with ULMWP General Secretary Octavianus Mote, the Prime Minister confirmed the support for West Papua joining the regional body and he also announced that the government would appoint a special West Papua envoy.

The meeting with Hon. Manasseh Sogavare

Upon meeting the Prime Minister, Mr Mote thanked the Prime Minister for his ‘splendid’ leadership during the Melanesian Spearhead Group (MSG) leaders summit in the Solomon Islands and his help for the admission of ULMWP to the MSG.

Mr Mote said “The ULMWP and the people of West Papua believe that the time is now ripe with the able leadership of the Chair to gain maximum regional support on the fight for recognition and understanding amongst the international community,”

In response, the Prime Minister said, “West Papua remains at the heart of the Democratic Coalition for Change Government and will stand by ULMWP and people of West Papua in their fight for international recognition.”

He went on to say “The Solomon Islands Government under the leadership of the Democratic Coalition for Change Government will appoint a Special Envoy on West Papua and will also seek West Papua’s admission to the Pacific Islands Forum Secretariat.”

Thanks to the Prime Minister

We would like to convey our deep and sincere thanks to the Prime Minister for his true leadership and outstanding support shown for the West Papuan people, who are in desperate need of further international support in the wake of the genocide and illegal Indonesian occupation they are enduring.

We hope that these breakthrough initiatives will help to further strengthen Melanesian solidarity for West Papuan freedom, as well as providing more crucial backing for the ULMWP joining the Pacific Islands Forum and being welcomed back into the Pacific family at last.