The important regional body, the Pacific Islands Forum has been urged by it’s by it’s own Specialist Sub-Committee on Regionalism (SSCR) to make West Papua a priority issue on the leaders meeting agenda in Papua New Guinea this September. The Sub-Committee apparently decided to act after an “increasing groundswell of support in the region for the people of West Papua, reflected in part by the media, particularly social media.” 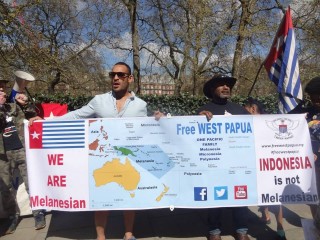 The Secretary General of the Forum, Dame Meg Taylor said “proponents suggest that the human rights situation has deteriorated.” and “The Sub-Committee acknowledged the Forum’s history and regional role in assisting territories achieve self-determination,”

According to PACNEWS, three possible actions were recommended. These include a fact finding ministerial group from the Pacific Islands Forum to West Papua, include West Papua on the UN Decolonisation List and impose sanctions against Indonesian companies and government enterprises found to be committing human rights abuses.

Other calls for the Forum to discuss West Papua

These important and ground breaking recommendations follow other loud calls by organisations such as the Australia West Papua Association and the PNG Union for a Free West Papua, for the Pacific Islands Forum to discuss West Papua. There is widespread popular support from across West Papua, Papua New Guinea and the rest of the Pacific to have the situation in West Papua raised at the Forum. Much hope has grown for this since the United Liberation Movement for West Papua (ULMWP) was made an Observer Member of the sub-regional Melanesian Spearhead Group this June.

We also join the growing list of organisations in calling upon the Pacific Islands Forum to raise the human rights abuses, long suffering and struggle for self-determination of the West Papuan people; as well as supporting West Papua to join the UN Decolonisation List.

We would like to thank the Forum’s  Specialist Sub-Committee on Regionalism (SSCR) as well as Dame Meg Taylor very much for the strong understanding of the situation in West Papua and for their comments on West Papuan human rights, self-determination and decolonisation.

We are very encouraged that the  Pacific Islands Forum is being urged to discuss West Papua and we are also very hopeful that the leaders of fellow Pacific Nations will take this important opportunity at the meeting next month to stand up against the genocide and illegal occupation of West Papua. It is time for all Pacific leaders to stand up for their Pacific Island brothers and sisters in West Papua, and the fundamental rights of the West Papuan people to self-determination and full freedom.