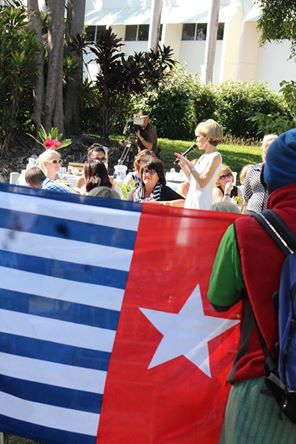 Today Free West Papua activists addressed the Australian government head on with important questions about supporting the West Papuan people. This is a significant date as it is exactly 46 years ago since Indonesia held the ironically named “Act of Free Choice” and forced just over 1000 people in West Papua at gunpoint to vote for Indonesian rule.

Please read the report on the Australian Foreign Minister today below, written by Australians for a Free West Papua.

The minister for Foreign Affairs agreed to meet privately with Peter Elaby on condition that no photos, recording devices or flags were present.

REPORT ON THE PRIVATE MEETING HELD WITH THE AUSTRALIAN MINISTER FOR FOREIGN AFFAIRS August 2, 2015 by PETER ELABY.

“On the morning of August 2, 2015, our group of Free West Papua supporters attended a fundraiser in Darwin as the key speaker was Australian Foreign Affairs minister Julie Bishop. We asked the ministerial advisers if she could meet us to discuss the human rights situation in West Papua.

Julie Bishop spoke for a short time then had a few questions from the crowd. She knew I wanted to speak to her but ignored my hand in the air waiting to ask her a question. After she sat down, we walked up to her table peacefully with the morning star flag and asked her if she was going to meet to discuss West Papua. She said to go over to another area and wait, so we did.

We continued peacefully holding Free West Papua banners and the morning star flag whilst the ministerial advisers negotiated with the minister to meet at our request. The minister finally agreed to meet privately only with me and on condition that no photographs or flags or recording devices were present. I agreed and soon I was lead into a room, searched and told to wait.

After 15 minutes the minister entered the room with one other woman and Federal policeman. The minister sat down and asked me what my name was. I said “My name is Peter Elaby and I come from West Papua but I am an Australian citizen as well. I know you are my Australian government foreign affairs minister so is it possible that I can ask you a few questions?”.

The minister replied “Sure, what do you want to ask me?”

I asked her “Why does the Australian government not look at solving the human rights problems in the Pacific and particular in West Papua?”

The minister replied that the Australian government cannot do anything because they respect the boundaries of Indonesian sovereignty.

I asked the minister for Foreign affairs “What is the difference between East Timor and West Papua?’ She was stuck but finally she replied “Well East Timor only got independence because Indonesia gave them a referendum”. But i said “No, the Australian government sent INTERFET troops into East Timor”. She then just started talking about Indonesian sovereignty again and how Australia can’t possibly interfere.

I next asked the minister “Why can the Australian government send troops into the Middle East but not next door in West Papua where the Indonesian government commits genocide of the people of West Papua and Australia just do nothing?’

She replied by repeating that Australia respects of the sovereign boundaries of Indonesia and that it is impossible for Australia to help.

The foreign affairs minister agreed that the people of West Papua helped Australia a lot in World War 2. She began explaining that Australia are educating some students from the pacific islands like Fiji, PNG and the Solomon Islands and that Australia work together with some Pacific Islands governments to solve the problems in the pacific region. But she didn’t say anything about the West Papuan human rights issues or genocide that is happening in West Papua.

We didn’t agree with each other because she didn’t mention how Australia could help solve the human rights issues in West Papua. She only wanted to talk about bringing students from the Pacific region while the real situation in West Papua is really upsetting me.

The foreign minister repeated again about Indonesian sovereignty and how Australia can’t do much. Then she asked me “what do you think?”

We are very encouraged that Australian Foreign Affairs minister Julie Bishop has been interviewed about West Papua and we are very grateful to Peter Elaby, and everyone at Australians for a Free West Papua for helping this to happen. We are also very grateful that Mrs Bishop acknowledged the important help  given to Australia by the so called “Fuzzy Wuzzy Angels” of West Papua and Papua New Guinea; and for admitting that the East Timor got independence because of an independence referendum.

For almost 25 years, successive Australian governments said they “respected Indonesian sovereignty over East Timor” but after continued national and international pressure, they finally decided to encourage Indonesia to hold an independence referendum there.

The solution for West Papua is the same and the Australian government has strong moral, political and legal obligations to support the people of West Papua at last having their own independence referendum. This was promised to the West Papuan people by the United Nations in 1962 but violated by the Indonesian government exactly 46 years ago today in the so called “Act of Free Choice”. West Papuans call this the “Act of NO Choice”.

We will continue to educate the world at a grass roots and governmental level about West Papua and the fraudulent way it was illegally occupied by Indonesia with the Act of No Choice.

We are raising support from people and governments everywhere and we are sure that the Australian government all all governments will one day support West Papuans exercising their fundamental right to self-determination in an independence referendum.

One day all governments will finally respect West Papuan sovereignty over West Papua.