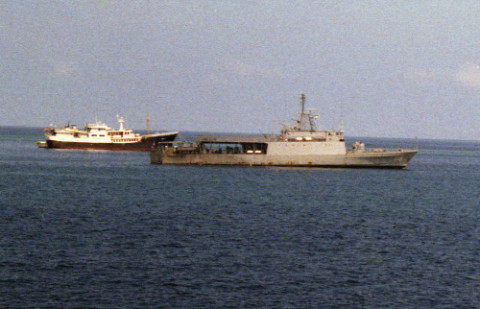 On 6 July 1998, West Papuans demonstrating for independence on the island of Biak, West Papua, were murdered by Indonesian military and police and large numbers were detained.

Today on the anniversary we remember the victims of those tragic events and repeat our demand for justice. To date the Indonesian authorities continue to refuse to investigate what happened or to prosecute those responsible. Time may have passed but the guilty perpetrators remain at large.

Until The Indonesian Government takes proper steps to address the matter the international community would be right to recognise Indonesia as a sponsor of state killings, in this case of a defenceless protest. This is a criminal act under international law that must not go unrecognised[i].

“The long-awaited attack took place at 5:00 a.m. on July 6. Troops from Battalion 733 Pattimura, stationed at the air force base at Manuhua aided local forces, and were reinforced by troops from two warships, a logistics ship called Waigeo and another with a registration number of 108. The troops opened fire from four sides. Witnesses reported that five civilians who were already on the ground prone were deliberately shot.

Soldiers were all over the hospital, and a nurse on duty said her superior was ordered not to say anything about anyone having died. She also told Human Rights Watch that when an army truck drew up to the hospital entrance with some of the wounded, the latter were just pushed off the truck.

There were reports of trucks taking away the wounded, however, and over thirty bodies washed up on the shore of East Biak in the weeks after the shootings took place. The government claimed they were victims of a tsunami that struck neighbouring Papua New Guinea; local people are convinced they were victims of the shooting. The bodies were buried without autopsy near the sites where they were found, contributing to the suspicion of a government cover-up.

In addition, two young men, Paulus Mamoribo and Nico Smas, died shortly after being released from detention, about three weeks after the shootings. The causes of death are not clear, but in neither case was an autopsy conducted.

Mamoribo, who had been shot in the hand during the demonstration, died at his home; Nico Smas collapsed and died while walking in the street. At least ten others believed to have taken part in the demonstration never returned home…”

In 2013 a “citizens’ tribunal” into the massacre was held in Sydney, Australia. It examined evidence and summoned witnesses who gave their accounts of what happened. The Guardian (13/12/13) reported some of the testimony:

‘Navy ships were used to dump the bodies at sea, the tribunal heard. Ferry Marisan, the director of the human rights organisation Elsham Papua, told the hearing that fishermen later found the bodies offshore.

“The bodies were mutilated. Some of them lost their legs or their genitals were not there,” he said.

Other witnesses told of being tortured and sexually abused in custody in the days and weeks following the attack.’

[i] Article 9 of the U.N. Basic Principles on Use of Force and Firearms by Law Enforcement Officials states, ‘A ‘Law enforcement official shall not use firearms against persons except in self-defence or defence of others against the imminent threat of death or serious injury, to prevent the perpetration of a particularly serious crime involving grave threat to life, to arrest a person presenting such a danger and resisting their authority, or to prevent his or her escape, and only when less extreme means are insufficient to achieve these objectives. In any event, intentional lethal use of firearms may only be made when strictly unavoidable in order to protect life.’