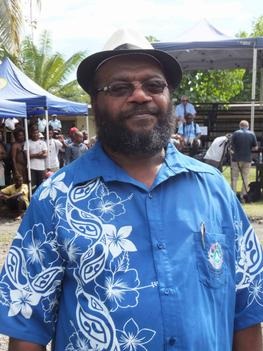 As the Melanesian Spearhead Group (MSG) meets in the Solomon islands, we are happy to report that the Spokesperson of the Front de Libération Nationale Kanak et Socialiste (FLNKS), Victor Tutugoro has expressed his full support for West Papua to become a full member of the group.

FLNKS is a political movement representing Kanaky/New Caledonia within the MSG. They were given full membership of the MSG and were also asked to become an inclusive and united group like the United Liberation Movement of West Papua (ULMWP) which is applying for full membership on behalf of the people of West Papua.

There has always been strong solidarity for West Papua from FLNKS and the people of Kanaky/New Caledonia and only earlier this week a rally was held in the Solomon Island’s capital city Honiara calling for full West Papuan membership of the MSG to be supported. Mr Tutugoro’s comments have therefore brought hope and gratitude to people of his nation, West Papua and all the other Melanesian nations.

In an interview with Islands Business yesterday, Mr Tutugoro said:

“In the past, the FLNKS gave support to the Palestinian people and the people of South Africa,” said Victor Tutugoro of the Front de Liberation Nationale Kanak et Socialiste (FLNKS). “I’ll continue to do so tomorrow on behalf of the West Papuans, on the basis of solidarity amongst Melanesian peoples.”

He also said he would encourage other Melanesian nations not to support changing Indonesia’s current status in the MSG. (Indonesia currently has observer member status but the Indonesian President is pushing for “associate member status”.

“The FLNKS is not in favour of this idea, for the FLNKS, the MSG is an organisation of Melanesian countries. As I see it, Indonesia is not part of the Melanesian bloc. The MSG must remain for the Melanesian nations.”

Mr Tutugoro went on to say:

“I struggle for human rights in my own country and I struggle for solidarity between peoples – especially the peoples of Melanesia. Certainly afterwards, there are questions of sovereignty. But today, we’re talking about human rights, about people who are being killed, whose cultural dignity is under threat. The West Papuans are claiming their rights – universal rights.”

Referring to West Papuans being told to form an inclusive and united group to apply for MSG membership, he said “What was decided in the June 2014 summit was exactly what the MSG decided for the FLNKS in the past…..This is what we’ve seen with the West Papuans, who came together in Port Vila last December under the guidance of the churches. At this meeting, they formed the United Liberation Movement of West Papua (ULMWP). This united movement submitted its membership application on 5 February 2015. I believe that these actions conform to the requests put forward by the MSG in 2014.”

We would like to thank Mr Tutugoro for showing his strong support and strong Melanesian solidarity for the West Papuan people in coming back to the Melanesian family as part of their greater struggle for full freedom.

We are very grateful for all the continued support from FLNKS and people right across Melanesia and around the world which continues to increase every day with more and more demonstrations, speeches and other actions promoting solidarity for the West Papuan people.

We remain confident that West Papua will join the Melanesian Spearhead Group and one day take its place as a fully free and Independent Melanesian nation.