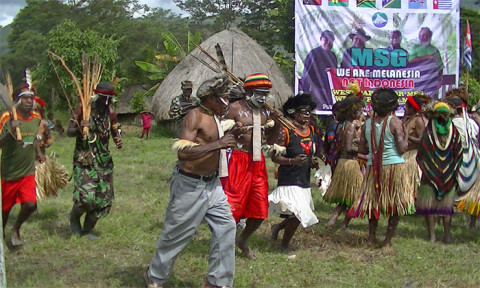 Monday June 22 – community members in Wamena demonstrate their support for full ULMWP membership of the MSG.

For more than half a century, my people have suffered under a repressive military occupation that is estimated to have claimed 500,000 West Papuan lives. This is not something Indonesians read about every day, but it is a significant stain on Indonesia’s international reputation and its standing in the region.

Like many of you, I held great hopes for the new presidency of Joko Widodo. During his election campaign, he promised a fresh start for the relationship between Jakarta and the people of West Papua, including through the offer of a new political dialogue and the withdrawal of Indonesia’s military presence. Unfortunately, President Widodo has failed on both counts.

At this week’s meeting of the Melanesian Spearhead Group (MSG), the region’s leaders will gather in Honiara to decide whether to welcome the West Papuan people as the newest member of their pre-eminent political forum.

West Papua’s membership of the MSG is long overdue. For more than 38 years, we were denied the right to refer to ourselves as Melanesians, but my people have stood steadfast in the face of a campaign to stamp out our culture, our human rights, and our dignity as a people. A majority of West Papua’s population remains ethnically Melanesian, and throughout the Pacific the sentiment is strong that we must have a seat at the MSG table. Unfortunately, the Indonesian government has sought to stand in our way.

In recent months, Widodo and foreign minister Retno Marsudi have toured the region with empty promises of aid and diplomatic cooperation, making the case to Melanesian governments that West Papuan membership of the MSG would somehow be a threat to Indonesia’s interests and the region more broadly. They have even gone so far as to suggest that it would be more appropriate for Indonesia’s provincial governors to be granted associate membership of the MSG, while conveniently overlooking the fact that West Papua’s Melanesian population needs to be represented by its own political leadership.

The only legitimate representatives of West Papua are the West Papuans themselves. For too long, provincial “governors” imposed by Jakarta have engaged in iron fist administration, and not in the interests of the people they purport to represent. Many have been personally implicated in serious human rights abuses, which MSG leaders have previously condemned. And with Indonesian’s provincial governors now set to be directly appointed by Jakarta this will only get worse. 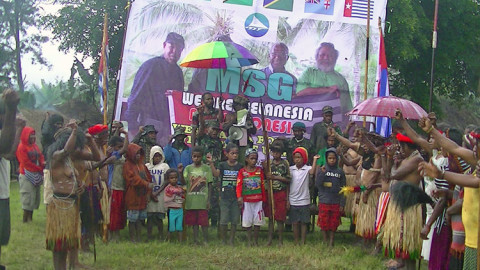 Monday June 22 – supporters of the ULMWP bid for membership of the MSG gather around their banner in Wamena, West Papua.

Ultimately, the Indonesian government has no right or basis – legal or political – for standing in the way of a decision by Melanesian leaders for Melanesia, and only Melanesia. West Papua’s application for MSG membership is grounded firmly in the MSG’s own founding principles, including respect for and promotion of Melanesian cultures, traditions and values, the inalienable human rights of the indigenous peoples of Melanesia, and most of all, the spirit of Melanesian solidarity. As an observer of the MSG, Indonesia must adhere to these principles.

West Papua’s request for membership has been considered by MSG leaders at their meetings in 2013 and 2014. On both occasions, MSG leaders raised serious concerns about human rights violations and atrocities committed against the people of West Papua, and in June 2014, they invited West Papua to form an inclusive and united umbrella group in anticipation of a fresh application for MSG membership this year. The political leadership in West Papua responded quickly. In December 2014, we formed the United Liberation Movement for West Papua (ULMWP), and it is this new political platform that is seeking MSG membership for the people of West Papua.

While we have worked hard to respond to MSG leaders, we remain frustrated and dismayed that there has been no parallel progress on Indonesian undertakings to allow greater autonomy in Papua and to draw down its military presence in West Papua.

As recently as March this year, Papua New Guinea prime minister Peter O’Neill confirmed that former Indonesian president, Susilo Bambang Yudhoyono, had personally promised him that Indonesian forces would be withdrawn from West Papua. But on the contrary, Widodo last month took an additional 6,000 armed personnel with him during a visit to West Papua. Even the president’s own announcement that West Papua would now be opened up to visits from foreign journalists is seemingly being reversed by Indonesian ministers who seem hell-bent on preventing international eyes from seeing what is really happening on the ground to my people. In the minds of many Melanesian leaders, Indonesia simply can no longer be trusted.

This week’s meeting in Honiara is a significant test for Melanesia’s leaders in the face of heavy pressure from a nervous Jakarta. But Indonesia has nothing to fear, other than the damage a continuation of the status quo will mean for its standing throughout the region. Just as the Kanak people of New Caledonia were granted full MSG membership before us, the West Papuan people need and deserve to be part of the Melanesian family, and the political grouping that handles its affairs. A positive decision in Honiara is in West Papua’s interest. It is in Indonesia’s interest too.

First published by The Guardian