The following appeared as a feature in the PNG Post- Courier newspaper on 22nd May 2015. 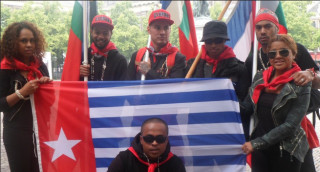 West Papuans with their flag as they continue to fight for recognition. Picture: voiceofmelanesia.com

In one month’s time, the eyes of the Pacific will turn to Melanesia as our leaders gather in Honiara to decide on West Papua’s membership of the Melanesian Spearhead Group.

For more than 50 years, my people have suffered a creeping genocide under a repressive Indonesian military occupation that is estimated to have claimed 500,000 West Papuan lives.

Next month’s meeting is a critical opportunity to give my people a voice, and to allow us to take our rightful place in the Melanesian family.

West Papua’s request for MSG membership is grounded firmly in the group’s founding principles: respect for and promotion of Melanesian cultures, traditions and values, the inalienable human rights of the indigenous peoples of Melanesia, and most of all, the spirit of Melanesian solidarity.

These principles are enshrined in the MSG’s2007 constitution, which all MSG members are bound to respect.

This year’s MSG Summit won’t be the first time the region’s leaders have had West Papua on their agenda. In recent years, they have expressed serious concerns about human rights and the atrocities committed against my people. And perhaps most importantly, the Melanesian leaders said in 2013 that they “fully support” West Papua’s right to self-determination.

Throughout the Pacific, there is a real sense that the time is right to stand with West Papua, and to bring us into the Melanesian family.

At the same time, Indonesian diplomacy has escalated, beginning withForeign Minister RetnoMarsudi’s chequebook tour of the region in late February, and a visit by President Widodoto Port Moresby last week.

With West Papua’s natural resources continuing to be a significant driver of the Indonesian economy, they will say and do anything to suppress support for our homecoming.

Ultimately,Indonesia has no right to stand in the way of a decision by Melanesian leaders for Melanesia, and only Melanesia.

Any suggestion that Indonesia must approve or consent to West Papua’s MSG membershipruns counter to the spirit of Melanesian solidarity that lies at the heart of the MSG, and is an insult to Melanesians everywhere. 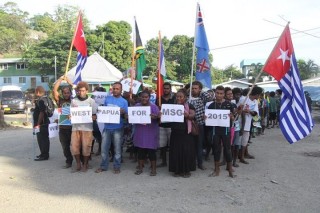 Demonstrators in the Soloman Islands show solidarity with West Papua’s bid to join the MSG.

Remember, Indonesia has already broken its promise to Prime Minister Peter O’Neillthat it would withdraw its military forces from West Papua, and has done nothing to hold out a genuine hand of friendship to West Papua and the people that have long suffered under the regime’s brutalityand campaign of terror.

The fact that President Widodo requiredan additional 6,000 armed personnel to accompany him to West Papua en route to Port Moresby demonstrates his lack of confidence and trust he feelsfromamong the people in what Jakarta calls its ‘provinces’, and his government’s attempts to stymie our MSG membership will do nothing to improve the situation.

With all of this in mind, we were very concerned to hear recent suggestions that Prime Minister O’Neill would prefer to avoid consideration of West Papua’s full MSG membership, and instead look at upgrading Indonesia’s own status to become an “associate member”.

Allowing Indonesian provincial leaders a seat at the MSG table risks isolating Papua New Guinea on the question of West Papua, and casts significant doubt on whether he truly has Melanesia’s best interests at heart.Clearly, the only legitimate representatives for West Papua are the West Papuans themselves.

We of course understand Prime Minister O’Neill’s concern about the need for West Papuans to have a united front at the MSG table, which is why we came together in December last year to form the United Liberation Movement for West Papua.

We havebeen making our case for MSG membership with a united voice, and wrote directly this week to MSG Leaders to reiterate our strong claims for membership. We look forward to reinforcing the point in person when Foreign Ministers and then leaders gather in Honiara next month.

For too long, the world has turned a blind eye to the plight of my people.

Our brothers and sisters in Melanesia now have an opportunity to take a stand, and allow us to take our rightful place in Melanesia’s pre-eminent political grouping.