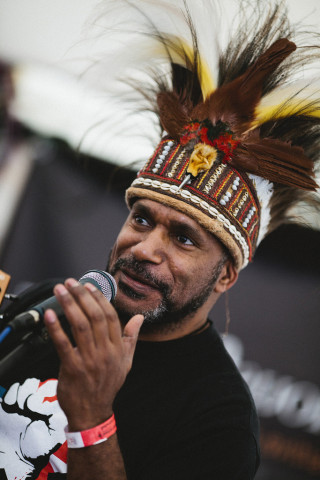 At 14:00, 13 May 2015 the United States (US) office of homeland security stopped West Papuan Independence leader Mr Benny Wenda from boarding a Virgin Atlantic flight from London to Los Angeles.

After check-in staff found an alert on their passport system, Mr Wenda was questioned by an official from the US Homeland Securities bureau office at London’s Heathrow Airport.

Mr Wenda told the official: “I am a Human Rights campaigner from West Papua, I am exiled and am campaigning for West Papua.”

After making phone calls the US official told Mr Wenda that his US visa had been revoked, but declined to say why. He told Mr Wenda to contact the US embassy.

Mr Wenda was issued the ten year business visa in October 2014 and has already made one visit to Congress staff on Capitol Hill in Washington using it.

Mr Wenda was set to embark on a speaker tour of California and Hawaii at the invitation of US groups supporting the Free West Papua Campaign. Pending an explanation from the US Government, the busy two week schedule of events is moving forward without Mr Wenda. Free West Papua campaigners in California are now even more determined to raise the voice that Indonesia seeks to silence.

Attempts to get answers by the Free West Papua Campaign (FWPC) in both London and Washington have so far met with silence. The FWPC is keen to know why Benny Wenda’s legitimate right to free speech in the US has been quashed and is working to try and get his visa reinstated.

“I hope that US officials respond to my situation soon so that I can join the tour. Concern is growing from people, politicians and UN officials in the United States about the ongoing genocide in West Papua. I am keen to follow-through their invitation to address these audiences and to urge political action by the US Government.”

The FWPC hopes that the issue is no more than a bureaucratic hiccup. However it is not the first time that Mr Wenda has been prevented from travelling to the US. In 2005 and 2013 he had visa applications refused and then went on to successfully apply for his current ten year business visa.

“I have travelled to the USA several times for meetings with political representatives, groups and churches. I also attended meetings with State Department officials who told me they approved of my lobbying and campaigning work. So you can imagine my surprise when my ten year visa was revoked without notice.”