Global Day of Action for journalist access in West Papua 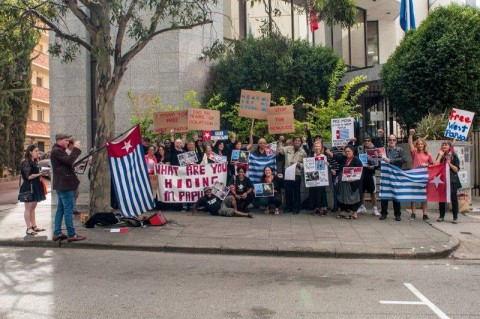 These demonstrations made much awareness around the world about the hidden situation in West Papua and many world media sources published news about the day of action. 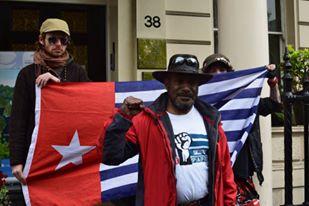 In London, West Papuan independence leader Benny Wenda spoke on the megaphone about Indonesia’s genocide and illegal occupation of West Papua. Benny said that it gave him hope to see these demonstrations all around the world spreading the voice of the West Papuan people when their voice has been made silent for more than 50 years. Also present was Peter Tatchell, a well known human rights campaigner in the United Kingdom who also helped to call for an end to the media blackout in West Papua. Andrew Smith MP, the co-founder of International Parliamentarians for West Papua (IPWP) sent a supportive statement for the demonstrators present. He said:

“If Indonesia continues to maintain the ban on journalists in West Papua, parliamentarians across the world will assume there are two reasons for this: first, they want to hide the human rights abuses, violent crackdowns and plundering of natural resources committed and facilitated by their armed forces; second, they do not want to world to see how widespread support for self-determination in West Papua is, because this would strengthen calls for a review of the discredited ‘Act of Free Choice’. It is precisely for these reasons that the fight for journalist access to West Papua is so important: it is integral to the wider struggle for freedom. Other states also have a responsibility to ensure that journalists have the freedom.”

A message from the Free West Papua Campaign

We would like to thank everyone who helped to set up these demonstrations, as well as all those who attended and all those who continue show support for a Free West Papua. This global day of action has helped to turn more international focus towards West Papua and will help to expose the genocide and illegal occupation Indonesia is trying to hide in West Papua. We are confident that journalists will one day begin to get access to West Papua again and the world will finally begin to find out more about the atrocities and colonialism there. 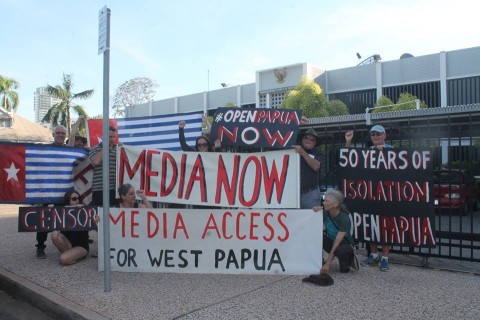 The Darwin demonstration for the Global Day of Action

You can help to join the continuing global call for journalist access in West Papua by sending this letter  to your elected representative, asking for them to lobby your government to support journalist access.
Please also sign this petition calling upon the Indonesian President to stop the killing of Papuans and to allow international journalists in West Papua.

More photos from the global day of action can be found on our Facebook Page.