Join us, Tapol, Survival International and many other organisations, to call on the Indonesian government to allow free and open access to West Papua for international journalists, humanitarian agencies and human rights organisations! 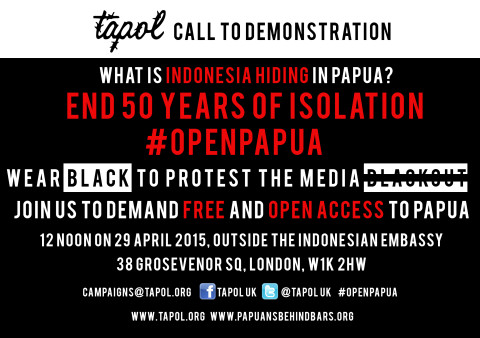 West Papua is one of the world’s most isolated conflict spots. For decades, indigenous activists campaigning for their rights have been arrested, disappeared, tortured and killed. Local journalists who uncover the truth face lethal risks. Foreign journalists trying to report on Papua have been arrested, deported and even imprisoned. One by one, international humanitarian organisations have closed their Papua offices. Access for UN human rights observers has been closed for eight years. Until Indonesia lifts the repressive restrictions on access to Papua, Indonesian security forces and paramilitaries are free to act with total impunity, and indigenous Papuans will continue to be killed.

Demonstrators will be wearing all-black clothing to protest the media blackout in Papua. They will be carrying placards, some of which will be ‘censored,’ and have their mouths taped shut. This visual protest will highlight the absence of free and open access to Papua for international journalists and human rights observers.

We invite advocacy groups around the world to join our call to the Indonesian government to open access to West Papua. Let the authorities know that the world is watching and standing in solidarity with Papuans. Protest against this veil of secrecy and ask President Jokowi to make good his Presidential campaign promise of opening access to Papua!

Please help to spread the word about the demonstration via social media and by printing and distributing flyers.