West Papuan leaders of the newly formed United Liberation Movement for West Papua (ULMWP), including Benny Wenda, Octovianus Mote and Rex Rumakiek, met in Brisbane over the weekend with Australian and some Aotearoa/New Zealand solidarity groups. As their campaign for full membership for West Papua to the Melanesian Spearhead Group (MSG) gains momentum, the ULMWP met to strengthen campaign support for the July MSG meeting in Honiara, where the application for West Papuan membership will be considered. 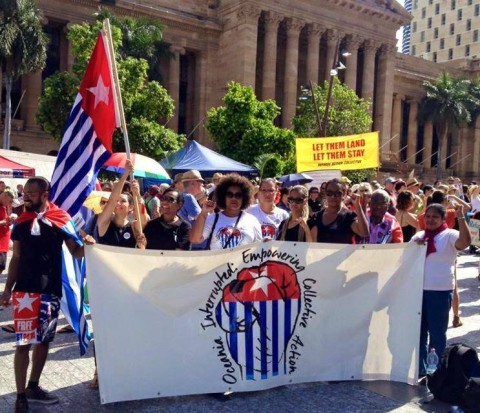 The newly formed ULMWP is the coordinating body representing all organisations in the struggle for West Papuan self-determination as a unified front. More than 40 delegates representing 13 West Papuan solidarity groups from across Australia and Aotearoa/New Zealand, met in Woollangabba, Brisbane, with the ULMWP to network, hear stories and develop resources for the campaign to gain full membership of the MSG for West Papua.

Benny Wenda, spokesperson for the ULMWP, said: “This gathering is very significant because this is where the people who have been behind us from the beginning of the campaign until today contribute their ideas. “We cannot do this on our own, we need everyone to come together to bring West Papua back to the family of Melanesian countries in the Pacific”.

The solidarity groups meeting agreed on pursuing a coordinated strategy of activism with Pacific Island communities, Indigenous and church communities in the lead up to the July MSG meeting.

‘One family’ Mary Joku-Ponifasio, a West Papuan member of the New Zealand-based group Oceania Interrupted, said: “I encourage Pacific Island women to speak out for the women who are suffering in West Papua and be their voice. We Melanesian women are one family.” “Australians and New Zealanders can play a vital role in supporting the Melanesian nations in standing up to the regional powers and moving to end the illegal occupation of West Papua.”

Peter Arndt, meeting co-organiser and representative of the West Papua Solidarity Group Brisbane, said: “There is growing support for West Papua in our region, and it is vital for all the solidarity groups to work together to support the ULMWP’s efforts to achieve this important step towards freedom for West Papua.” “There is now an opportunity to turn this support into concrete, effective action, by getting the MSG leaders to grant West Papua a voice at the table.”