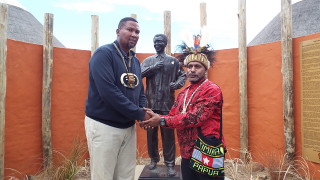 Benny Wenda shaking hands with Chief Zwelivelile Mandela at Mveso, in front of the statue of Nelson Mandela.

Exiled tribal leader Benny Wenda came to South Africa on the 16th of February to seek support for self-determination and freedom for his people in West Papua, who are currently suffering under the brutal Indonesian occupation. West Papua is the western half of the second largest island in the world; bordering Papua New Guinea it is home to 250 different tribes and the world’s largest rainforest after the Amazon.

Over 500,000 indigenous people have been slaughtered by the Indonesian military over the last 60 years. This ‘silent genocide’ is hidden from the international community, with foreign journalists banned from entering West Papua by the Indonesian authorities. Benny faces constant harassment and intimidation by the Indonesian government, but he refuses to stop making the cry of his people heard. He is calling on the people of South Africa to help West Papuans.

Benny received unprecedented support for West Papuan’s right to self-determination and independence during his highly successful and historic tour. Mr Wenda lobbied politicians, spoke at major Universities, met with Amnesty International and other NGOs, and mobilised support from grassroots movements. Benny was delighted with the response of the individuals and groups he met, “my spirit has been strengthened by the genuine solidarity that I have received from everyone here, to take back to my people in West Papua.”

Meeting the Mandelas at Mveso

In one of the tour’s most significant moments, Benny met Chief Nkosi Zwelivelile Mandela, grandson of Nelson Mandela, at Mveso, the great Madiba’s birthplace. Through this meeting he was enabled to “feel the spirit of the struggle and to receive Mandela’s blessing for my people”. The Mandela royal family and the Mvezo traditional council welcomed Benny, and he had the honour of meeting HRH Zulu King Dlamini and his delegation and HRH Thembu Queen Noluntu. It was an emotional day, which concluded with Chief Zwelivelile Mandela giving an inspirational and moving speech, declaring that Mandela’s legacy and spirit will continue to live on in the West Papuan struggle.

He said: “As the Mandela royal family and the Mvezo traditional council, you have our undying support. We will ensure that your voice doesn’t become isolated and forgotten, for my grandfather represented the majority as well as the minority in the global community. He was the voice of the voiceless society and we therefore today wanted to say, that when we welcome you to this humble home of the Mandelas, know that you have our full support. We will continuously keep you in our prayers in your cause and wherever you need us to lean to your support, we will always be there.” 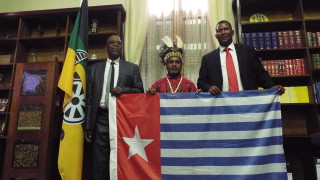 Mr Wenda also met with politicians in Parliament House, Cape Town. Benny was hosted in the offices by Chief Whip Stone Sizani who spoke at length with him about the history of the South African struggle. Mr Sizani told Mr Wenda that there was no need to convince him of West Papua’s own struggle, because the people of South Africa had experienced the same suffering. He showed genuine support for the campaign and talked of how the West Papuan’s fight for independence is now also South Africa’s fight.

Chief Nkosi Zwelivelile Mandela attended to show his support. Mr Wenda was given a tour of Parliament House, where he had the honour of meeting Madame Speaker Baleka Mbete, and was also invited to bring the issue to the Houses of Parliament.

Thanks and regards,
The Free West Papua campaign.