A member of Lucky Dube’s “One People” band, Phuma Maduna said: “One day West Papua will be free and we’ll be there to celebrate with you, marching and saying we are free and freedom is ours! I wish you good, good, good luck. Jah bless!”

To show support for the struggle, the band recorded a new freedom song for West Papua called “Free West Papua”. This song was recorded with Benny and is expected to be released soon.

The spirit of Lucky Dube’s band fought in the struggle against apartheid with songs of freedom and although Lucky Dube was tragically shot dead in 2007, his band continues to sing against injustice everywhere. Lucky Dube has become a hero for West Papuans who play his songs at rallies and held a public mourning gathering after he died. 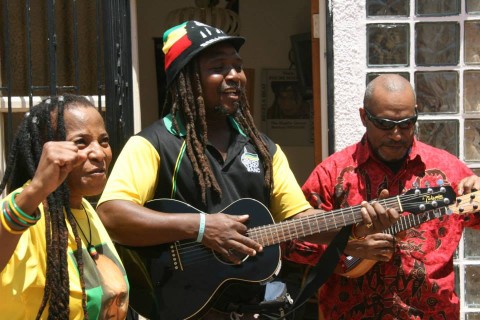 The Free West Papua Campaign would like to express our thanks to Lucky Dube’s band for continuing in his vision, singing songs of freedom for all people around the world.

We are very grateful for the true fighting spirit shown for the people of West Papua from the band of Lucky Dube. We are fully confident that one day West Papua will finally be free and very much hope that Lucky Dube’s band will play their Free West Papua song in a Free West Papua!

As Lucky Dube said himself: “Everywhere in the world, people are fighting for freedom.” With his spirit, the people of West Papua will continue to fight for their freedom too.