Today history was made as for the first time ever, the Prime Minister of Papua New Guinea spoke out against the oppression of PNG’s brothers and sisters in West Papua.

You can listen to his speech about West Papua here 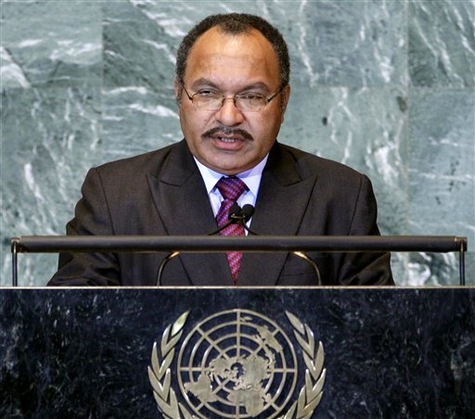 PNG Prime Minister O’Neill says “As a country, time has come for us to speak out about the oppression of our people. (in West Papua)”

With a very powerful and ground breaking speech, Mr O’Neill quite frankly told those assembled: “Sometimes we forget our own families, our own brothers, especially those in West Papua.”

Going further he then said: “As a country, time has come for us to speak out about the oppression of our people.”

With applause and cheers from the cabinet, Mr O’Neill condemned the continuing human rights atrocities in West Papua which continue to be shared on social media.
He said: “Pictures of brutality of our people appear daily on the social media and yet we take no notice. We have the moral obligation to speak for those who are not allowed to talk. We must be the eyes for those who are blindfolded. Again Papua New Guinea as a regional leader, we must take the lead in having mature discussions with our friends and more so in an engaging manner.”

This highly significant speech was made only one day after the United Liberation Movement for West Papua (ULMWP) submitted an application to join the regional Melanesian Spearhead Group. This application was formally supported by the government of Vanuatu and has received widespread support from other parliamentarians and people right across Melanesia.

This was an incredibly important moment for the West Papuan struggle as no Papua New Guinean Prime Minister has ever spoken out against oppression in West Papua so strongly before. Mr O’Neill’s words signal a clear change in policy by the government of PNG and an example of the continuing shift in Melanesian politics towards recognizing West Papuans as brothers and sisters and West Papua itself as an integral part of Melanesia.

This is very encouraging news for West Papua and the Free West Papua Campaign would like to give our warmest thanks and further encouragement to Prime Minister O’Neill for his very significant and moral speech supporting the suffering cries of PNG’s fellow Melanesian people in West Papua.

We are confident that with such consistent and meaningful support, the international community as a whole will also join in the calls for freedom and justice for West Papuan self-determination and freedom.

We will continue to lobby the Prime Minister and raise support and awareness from governments and people in Melanesia and right across the world for a Free West Papua.