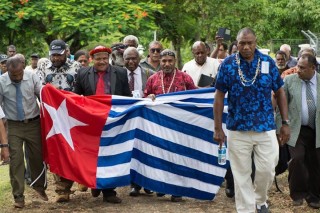 President of the Malvatumauri National Council of Chiefs, Vanuatu, leads the united members of the West Papuan Independence movement to the MSG to submit their application for full membership

During a historic ceremony on the steps of the MSG Secretariat, ULMWP Secretary General Octovanius Mote on behalf of the three main resistance groups, formally handed the application to the MSG’s Director General, Peter Forau.

The ULMWP has now lodged both an application for full membership, as well as a Constitution to guide the newly unified Papuan resistance as it continues its diplomatic push for self determination.

ULMWP Secretary General Mote said “today the hearts of our Papuan people are with us as we make this application to be properly recognized by the family of Melanesia. We believe we have fulfilled the criteria asked of us by the MSG and we trust the MSG will process our application with due deliberation”.

“ At the MSG summit in Noumea, the leaders endorsed our “inalienable right to self-determination” but asked us to unify under one group so as to be representative of all the Papuan people. Last December we achieved this unification during a historic reconciliation meeting here in Port Vila and thanks to the support of both the Vanuatu government and Pacific Council of Churches.”

ULMWP spokesman Benny Wenda added “We believe this is an urgent matter to resolve because of the ongoing atrocities committed by the Indonesian military and the program of transmigration which is accelerating and according to current trends, means that indigenous Papuans will only make up 28% of the population by 2020. Since the election of its new government, we are only seeing an increase in Indonesia’s military presence and intimidation, so we place our hope and trust in our fellow Melanesians to recognize that our struggle is just. We are not just defending our homeland, we are defending Melanesia.”

Sec-Gen Mote also pointed out that tomorrow, February 5, marks the 160th anniversary of the arrival of the first missionaries and Word of God coming to West Papua.

“Just as missionaries brought the light, so too we hope the MSG will assist us in finding the light that leads us to independence one day”.

Ev. Edison Kladius Waromi SH, Prime Minister of the Federal Republic of West Papua, has endorsed the ULMWP’s application saying “today we are happy. The Papuan resistance has unified under the ULMWP leadership and is now the only recognized group with a mandate to seek MSG membership . We ask our brothers and sisters in the region not to abandon us.”

It is expected that the MSG will make a decision on West Papua’s application during an MSG leaders summit in the Solomon Islands in July this year.

For more information, please contact Benny Wenda on (678) 5461508 or bwenda@infopapua.org