We are glad to announce the winners of the December the 2014 1st Free West Papua flag raising competition:

The 1st of December marks the date when the West Papuan flag was raised for the first time in 1961 with the promise of independence on the same day exactly 9 years later. In solidarity with the West Papuan people, this flag is raised all around the world every 1st of December and last year we made a big effort to encourage people everywhere to raise the flag. We also said that we would send a Free West Papua poster to the person/group who we feel has taken the best/most dramatic photo.

The response was incredible and we received more photos of flag raisings from all over the world than any year before. Photos can be seen here

After discussing with the Free West Papua Campaign team, it was decided that BOTH of these photos taken were considered to be winners of the best/most dramatic photos on the 1st of December, raising essential awareness for a Free West Papua.

All the photos received were incredible and really important for raising awareness. We feel in many respects that you are all worthy of being winners! 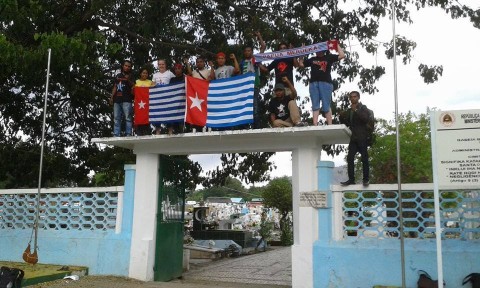 In this cemetery and even under this gate, hundreds of East Timorese were massacred by the Indonesian army as they protested for freedom. We are very moved to see the West Papuan flag raised at this incredibly significant part of Timor-Leste

The flag raising in Timor-Leste (East Timor) was chosen as it was taken in an incredibly significant and moving place for all East Timorese people, in the Santa Cruz cemetery in Dili. It was here where hundreds of Timorese were massacred by the Indonesian military just for calling for a Free East Timor. We are greatly inspired by our brothers and sisters in Timor-Leste and hope for their spirit and solidarity in fighting for our own independence from Indonesia.

We contacted someone from TiPaCo to let them know our decision and we heard a very moving and inspiring story about how the flag raising took place:

“We choose this location for obvious reasons, it gave us the chills when we climbed that gate. It was an emotional moment for all of us. So many young Timorese lost their lives here in 1991, in answer to their call for freedom. Jofrey Korwa from Free West Papua Campaign in The Netherlands (who passed away in June 2013) was a co-founder of the TiPaCo network, which was launched in Dili with Timorese human rights activists. Jofrey inspired us and we will continue in his honour. I climbed that wall with Jofrey in my heart.

We thought the Aus (AFFWP) picture should win and now we are both winners! But in the end…. it is all about solidarity and we saw so many great pictures. Our Timorese comrades were so proud to be part of the picture collection and now I can inform them that our picture is a winner. I am sure they will cry when they get the news and that will inspire them to continue their support for West Papua.

In Timor they would say: A luta continua!”-Timor Papua Connection co-founder 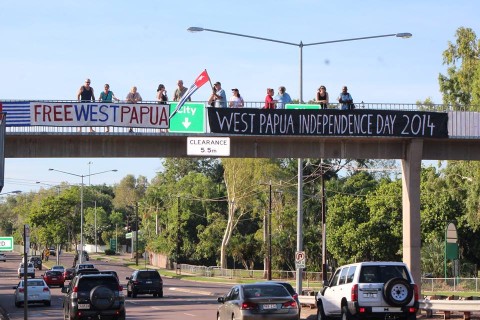 On the Bagot Road Overpass in Darwin, Australia, this flag raising caught a lot of attention and raised a lot of awareness from so many people. A great way to let the world know about the situation in Wets Papua

This flag raising, taken at Bagot Road Overpass in Darwin, Australia was chosen as it was a very powerful idea to raise a lot of awareness for a Free West Papua. Perhaps everyone in every car that drove under the bridge would have seen the banners calling for a Free and Independent West Papua, along with the West Papuan national flag, the Morning Star, which is banned by the Indonesian government in West Papua. We think that this is a great way to raise awareness for West Papua and are really happy to see this action being held, reaching so many people in Australia about what is happening to their neighbours in West Papua.

We contacted AFFWP also and asked them if there were any stories or a few words they would like to share with us. They replied:

“MANY more supporters for Freedom for West Papua are arising in Australia everyday. We have a BIG year planned for 2015 in this changing tide and we will raise your Morning Star more and more and more until your Country and your people are free and safe. Merdeka our friends. Merdeka!”-Australians for a Free West Papua

Our thanks to the winners and to you all 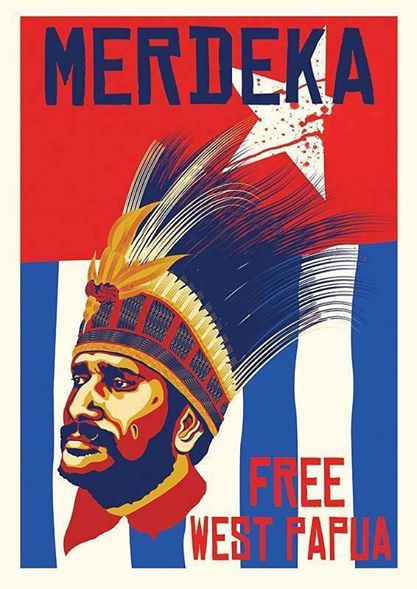 We would also like to give our warmest thanks and gratitude ALL those who took part in last year’s global flag raising for a Free West Papua (the largest ever yet!).
The event, which lasted for several more days than expected was a resounding success, with international media reporting on how this movement is drawing global support and with a great surge of awareness raised for West Papua.

The images sent in to us reached hundreds of thousands of people and encouraged many others to become supporters of the movement. We encourage you all to continue to spread the world about the situation and help others to do the same; lobbying parliamentarians, human rights groups, churches and other organisations to support self-determination for West Papua.

Once again, we would like to acknowledge that while these 2 photos were chosen by the Free West Papua Campaign as the winners of last year’s competition, ALL of your photos sent into us were much needed and fully appreciated. The extraordinary amount of global awareness as a whole, especially on social media were not raised by just 2 photos but by the collective efforts of you all. We hope you and many more people around the world will make such brilliant flag raisings again this year!

For this struggle to remain alive in the international eye, it is essential that enough people know about West Papua and how it was illegally invaded by Indonesia. By raising the flag, you are bringing the voice of the West Papuan people to your own neighborhoods sending it out globally, reminding the world that West Papua was a nation and how the people of West Papua are always crying out for their nationhood and freedom to be restored once again.

With all your continuing support from around the world, we are sure that one day West Papua will finally be free.