On 13th October,protests were held all over West Papua in support of the release of French journalists Thomas Dandois and Valentine Bourrat being detained by the Indonesian authorities in West Papua. 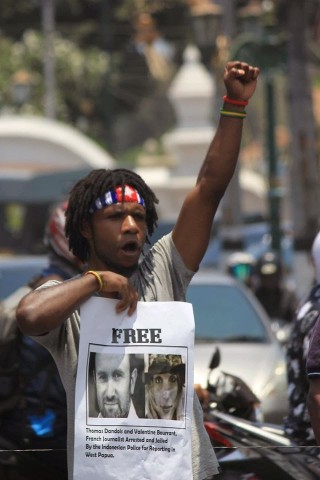 The Indonesian government still bans all foreign journalists from entering West Papua and Thomas and Valentine were arrested there on August 6th simply for reporting on the situation. They now face a potential 5 year jail sentence just for doing their duty as journalists. The Indonesian government is still systematically trying to cover up their atrocities in West Papua by banning all foreign media. They do not want the world to know the truth because they know that when it is exposed, the international community will help to support the West Papuan people and their struggle for self-determination.
By holding this protest, West Papuans pressurise the Indonesian government to stop hiding the truth in West Papua and to let journalists have access so that the world will finally know what is really happening there.

The day of action

This nation wide day of protests, organised by the West Papua National Committee (KNPB) was held all over West Papua and also by Papuan students in Indonesia. The protests brought hundreds of people onto the streets to call for the release of the pair. In Port Numbay/Jayapura the KNPB demonstrated peacefully on the street to call for the release of the journalists but were blockaded by a convoy of Indonesian police vehicles and a large number of armed Indonesian police who forcibly broke up the demonstration and arrested 17 protestors.The names of those arrested are: 1. Eliaser Anggainggom 2. Agus Kosay 3. Ucak Logo 4. Regina Wenda 5. Yimi Broway 6. Marten Suhuniap 7. Rebekah Komba 8. Marice Mambrasar 9. Lazkar Same 10. Isak Salak 11. Peter Petege 12. Manu Mohi 13. David Walilo 14. Palina Pagage 15. Teren Sorabut 16. Wilem Wandik 17. Tinus Heluka 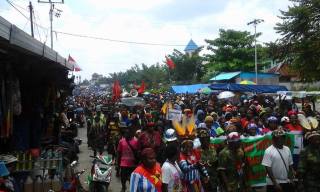 In Timika, almost 1000 Papuans rallied to show their support for the release of the journalists and media freedom in West Papua. They protested down the streets but were met with fully armoured Indonesian riot police and armoured police vehicles.
Here is a video of the Timika protest:

Similar protests were also held in Manokwari, FakFak, Nabire, Merauke, Yahukimo and Sorong. The West Papuan Student’s Alliance (AMP) also protested on the islands of Java in the cities of Yogyakarta, Bandung and Surabaya.

This day of action, involving thousands of Papuans in more than 10 cities in West Papua and Indonesia, was an extremely significant day in drawing international awareness and pressure upon the Indonesian government. This pressure continues to push the goal of the journalists release, media access to West Papua and ultimately self-determination for the West Papuan people.

Summation of the protests

We are appalled that over 40 peaceful Papuan protesters were arrested by armed Indonesian police just for demanding the release of two innocent journalists. Actions such as these undertaken by the Indonesian state show clearly how scared they are of the international community finding out about what is really  happening in West Papua and of West Papuans demanding their own human rights peacefully.

The Free West Papua Campaign will continue to also push for the journalists release and for self-determination and freedom for West Papuans at last. We will be sure to  keep you updated about the situation in West Papua, including about  the mass coordinated actions such as these.