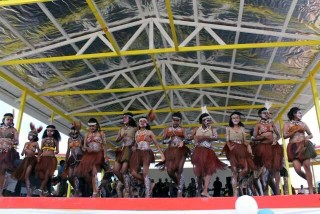 West Papuan dancers on the stage

The event took place from 9 am to 6 pm and was held at Constitutional Park in the Waigani district of the city. Many people attended the Cultural Day which showcased a wide variety of West Papuan culture from right across the country, raising essential further solidarity and awareness for West Papua from PNG. Activities at the event included traditional dances, face painting and musical performances. Stalls were also set up, selling West Papua related merchandise. 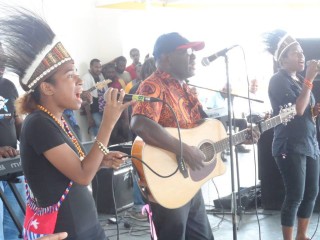 The governor of Port Moresby, Mr Powes Parkop has always been a very strong advocate for a Free West Papua and is a founding member of International Parliamentarians for West Papua (IPWP) in Papua New Guinea.

He also helped to set up the day and made a powerful speech saying that from now on, every year there will be an official West Papua national day in the Nation’s Capital. This is an opportunity for all the West Papuan people to assert their rights in Papua New Guinea.

Similarly the Minister for Tourism and Culture, Mr Boka Kondra also made a powerful speech in support of the West Papuan people and in preserving the culture. Former West Sepik Governor John Tekwie was also present and as was Free West Papua Campaign-PNG Coordinator Mr Fred Mambrasar. Mr Mambrasar raised awareness about the plight of West Papuans and also reminded the people of the incredible bravery of Mr Arnold Ap, a legendary musician from West Papua who was assassinated by Indonesian special forces just for promoting West Papuan culture, identity and freedom. 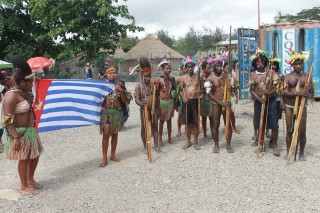 West Papuans on the day in traditional dress

A message from the Free West Papua Campaign

The Free West Papua Campaign is extremely happy at how the day progressed and very grateful to all those who helped to coordinate and set it up including the West Papua Students Association of UPNG and NCDC Governor Powes Parkop. We would also like to thank all those who performed on the day such as Sir George Telek, Basil Greg and the many West Papuan dance and music groups who also participated. Finally we would like to thank all those people from across West Papua and PNG who attended this historic day and raised much needed awareness and support for West Papua.

We are very confident with the strong and increasing support for West Papua from within Papua New Guinea. We continue to mobilise further solidarity for a Free West Papua from all over PNG, including through the lobbying of parliamentarians and civil organisations.

Once again, a very big thank you to all those who attended the day and who continue to help and raise awareness about this struggle for a Free West Papua.