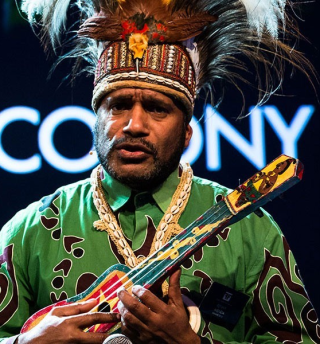 Benny Wenda speaking at the Oslo Freedom Forum in 2012

The Nobel Peace Prize is a prestigious international award, given to some of the most prominent and well known campaigners for peace in the world. The Nobel Committee which presides over and awards the Prize gives it to the people or organisations who have “done the most or the best work for fraternity between nations, for the abolition or reduction of standing armies and for the holding and promotion of peace congresses”. Past Nobel Peace Laureates include Nelson Mandela, Aung San Suu Kyi , Archbishop Desmond Tutu, and Jose Ramos Horta

Benny has been nominated as he has devoted his life to a just and peaceful solution to the conflict in West Papua, the western part of the island of New Guinea. West Papua, which is illegally occupied by Indonesia, continues to experience a slow genocide that has killed an estimated half a million Papuans since 1961. The struggle for peace and self-determination in West Papua has remained largely unreported, since Indonesia restricts the entry of foreign journalists and humanitarian organisations: in the face of this silence the efforts of Benny Wenda are all the more courageous and vital. You can read more about Benny’s story, including his wrongful imprisonment and brave escape here.

This year, Benny was jointly nominated by:

Catherine Delahunty: Member of the New Zealand Parliament and Green Party Spokesperson for the Environment, (Mining, Toxics) Education and the Treaty of Waitangi

Ralph Regenvanu: Member of the Vanuatu Parliament and President of the Land and  Justice Party

Benny was also nominated individually by:

The winner of this years Nobel Peace Prize will be announced next Friday on 10th October so please do keep Benny in your hearts and prayers. He has recently been invited to Norway by the esteemed Oslo Freedom Forum and will be present in the country during the award ceremony. Benny is one of 278 candidates to be officially registered by the Nobel Committee and we very much hope that he will be chosen to receive the prize.

Benny is available for media interviews and other media related inquiries and can be contacted here: office@bennywenda.org
Press contact number: +447833114087