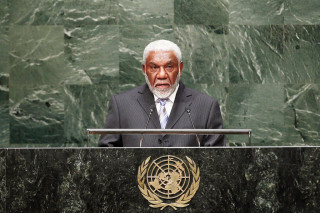 Today history was made at the United Nations as the Prime Minister of the Republic of Vanuatu, His Excellency, Mr Joe Natuman addressed the General Assembly and payed tribute to Dr. John Ondawame, an independence leader of the people of West Papua, who passed away earlier this month. The Prime Minister can be seen speaking about Dr Ondawame at the UN in a video from 23 minutes here

During his speech he addressed ‘existential threats being faced by Pacific islands’ and with regards to self-determination, the Prime Minister gave a moving tribute to Dr Ondawame.

He said: “Mr. Chairman, I cannot close this section of my speech without paying tribute to the late Dr. John Ondawame, a freedom fighter from West Papua who passed away last month while in exile in my country. He was laid to rest in my country as a hero who has fought for the right to self-determination for the people of West Papua. He had a dream that one day the United Nations and all nations advocating and promoting democratic principles will hear their cries and deliver the promises for a self-determined future. At his funeral service, I stated that his struggle for freedom and justice will continue to be our struggle until colonialism is eradicated.”

This was a very touching speech for all West Papuans, who also continue to struggle with the same vision as Dr. John Ondawame for a free and independent West Papua.
Dr. Ondawame has received tributes from across the world for his lifetime’s work in gaining support for the freedom of his people and it is very fitting that his dream was also recognized by the international community at the United Nations level as well.
This is the third time that a Vanuatu Prime Minister has spoken about the Free West Papua struggle at the United Nations and this speech has boosted the incredible trust and confidence of the West Papuan people with the Republic of Vanuatu, which has always remained firm in supporting self-determination and freedom for West Papua.

The Free West Papua Campaign would like to give it’s deepest thanks and gratitude to His Excellency, Mr Joe Natuman and the Republic of Vanuatu for this truly outstanding and noble tribute to the great Dr. John Ondawame, a true hero of the West Papuan people. We remain extremely encouraged at the remarkable advocacy shown for genuine self-determination for the people of West Papua from Vanuatu and are very grateful for this latest demonstration of support at the United Nations. 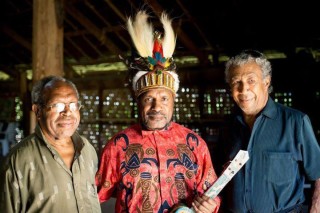 It is our firm hope and belief that with the continuing commitment of the government of Vanuatu and of other nations around the world, the people of West Papua will finally have their fundamental right to self-determination fulfilled and will at last live at peace in their own country.

Thank you very much Prime Minister Joe Natuman for such an honorable speech in recognition and respect of Dr John Ondawame and the ideals of both himself and his people for a Free West Papua.