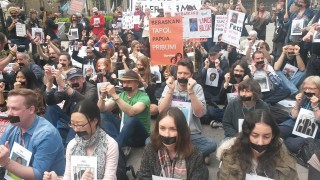 Demonstrators outside the Indonesian embassy in Lonon

On 2nd April people around the world demonstrated in solidarity with over 70 political prisoners currently being held in West Papua. Demonstrations took place in Jayapura, London, Melbourne, Brisbane, Wellington, Auckland, the Hague and Edinburgh. The demonstrations were a huge success, giving hope to the prisoners, reminding them that they have not been forgotten and sending a clear message to the Indonesian government that the world condones the imprisonment of so many people just for standing up for their right to freedom.

People across the world wore placards representing 76 political prisoners currently behind bars. The demonstrators had tape over their mouths to represent the denial of freedom of speech in Papua and wrists handcuffed together. Banners called for the release of the prisoners and highlighted the fact that political arrests in Papua had doubled from 2012 to 2013. The visual impact of the demonstrations received press coverage in New Zealand, Australia, across the Pacific and crucially in Indonesia itself. 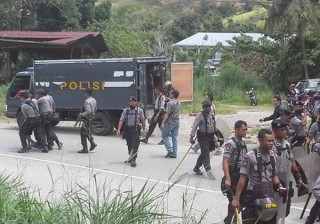 A large demonstration took to the streets of Jayapura (the capital of West Papua) in a further show of solidarity. The demonstration began peacefully but was violently dispersed by large numbers of armed police who taunted the crowd by calling them ‘monkeys’ before firing shots. Two protesters, Alvares Kapisa and Yally Wenda, were arrested and badly beaten with one of them requiring stitches. The Indonesian police meting out exactly the sort of treatment the demonstrators were peacefully protestng against. The two have since been released.

The following message was received from prisoners in Abepura prison in response to the global demonstrations of solidarity today: 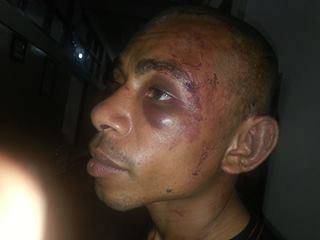 “We have been imprisoned because of our peaceful actions in the struggle to have the Papua nation’s sovereignty returned that was annexed into Indonesia in the 1960s. We are extremely grateful to all who continue to support us in international solidarity especially your actions this day to uphold truth, justice, democracy and human rights.  Your support in solidarity in any form helps us so much to make reality the hopes of our ancestors for our people to finally be free and independent.”

Ian Okoka, a Melbourne-based Papuan independence activist, said: “Papuans are losing their right to freely express themselves and many have fled to the jungle for fear of being put in jail.

“Papuans who are seeking independence for Papua through peaceful means are facing threats of arrest and violent intimidation by security forces. Often those arrested, are charged with treason or incitement which can carry lengthy prison sentences.” 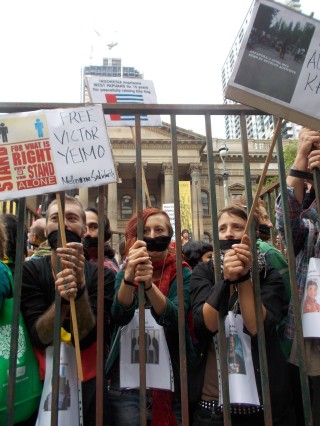 Protestors behind bars in Melbourne

According to updates published by the Papuans Behind Bars monitoring collective, political prisoners in West Papua are frequently tortured and forced to confess. Most are beaten and they are often subject to cruel and degrading treatment such as having their heads shaved, being forced to beat one another, and being denied food and medical treatment.

Severe restrictions on international organizations and foreign media working in West Papua mean that many abuses take place in secret and independent reporting is almost impossible. This is a serious concern in a territory that is reported to host one of the highest concentrations of security forces in the world.

“If Indonesia has nothing to hide in West Papua, then why aren’t journalists and international organisations allowed in?” said Paul Barber, TAPOL’s Coordinator. “The 76 political prisoners in Papua can no longer be hidden from the world.”

Both Peter Tatchell and Benny Wenda spoke powerfully at the London demonstration. Benny spoke about his experiences of being in held in terrible conditions in prison in West Papua before he escaped to exile in the UK. He told how he got messages of support from around the world in his prison cell and the international attention he received gave him hope and forced the guards to move him from a cell full of excrement to better conditions and remove his handcuffs. On behalf of all the people of West Papua he thanked everyone who took to the streets to show solidarity with and give hope to the prisoners in West Papua.