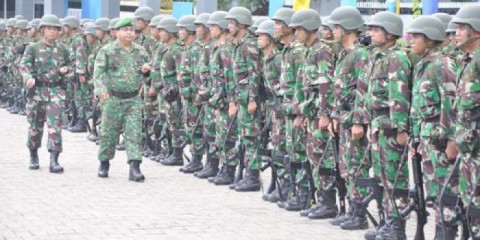 Indonesian Military Commander of the 650 troops with his soldiers

The Indonesian government has announced today that it will ship 650 extra soldiers to West Papua from Indonesia and directly to the Papua New Guinea border from February onward, equipped with photos of West Papuan activists and freedom fighters.

The soldiers will be shipped from Kalimantan in Indonesian Borneo and will be from the 600/Raider Infantry Battalion/623/BWU.

This poses a direct threat not just to West Papuans living inside of West Papua but also to refugees living across the border and Papua New Guineans too.

We must not let Indonesia use our Island of New Guinea as its own military backyard.

Please share this crucial news so that the world knows about the ever more dangerous situation in New Guinea.

Please help before it is too late. Take action here to help the people of West Papua.