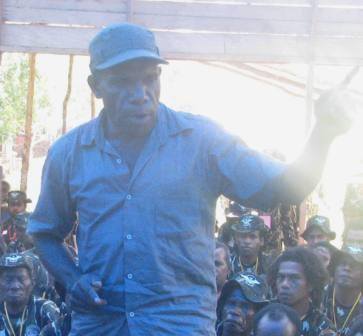 There are now many reports that Commander Danny Kogoya of the West Papua National Army (TPN/OPM), who tragically died on Sunday was poisoned by Indonesia (see report from ABC News Australia here)

Commander Kogoya had his leg forcibly amputated by Indonesia without his permission or that of his relatives earlier this year after the Indonesian security forces shot him and then imprisoned him.

After he left prison, he was threatened with arrest again, so he was forced to cross the border into PNG but continued to fight Indonesia with just one leg but tragically died on Sunday 15th December.

The Papua New Guinean doctor testing his blood has already testified that Danny Kogoya did not die because of injuries sustained from his amputated leg as Indonesia has claimed, but instead from unnatural toxic chemicals which recently entered his blood, swelling his spleen and causing a splenomegaly.

With regard to the non-responsiveness of Mr. Kogoya to medical treatment in PNG, and because of the unanswered questions surrounding his death, a formal request was sent to the Vanimo Court House which ordered on 17 December 2013 that the case of Mr. Danny Kogoya was to be treated as a murder investigation. As a consequence of this decision, an autopsy was also scheduled to take place yesterday, something which Mr. Kogoya’s relatives had already agreed to.
As the doctors were about to perform the autopsy at around 3 p.m., two Indonesian agents entered the premises with an official from the Indonesian Consulate in Vanimo in an attempt to block the process of the autopsy which had been ordered by the Vanimo Court House earlier on. By doing so they are trying to prevent further analysis of his remains.

On Tuesday 17 December 2013, a friend of Mr. Kogoya, Lambert Siep said: “The doctor said it was most likely a chemical which is toxic and they took the blood and body parts to Port Moresby to make sure it is a type of poison.”

Victor Yeimo, the chairman of the West Papua National Committee (KNPB) confirms that Danny showing signs of poisoned was known to former Abepura prison inmates, even Danny himself has said there is something wrong in the body.

“We hope that the doctors in PNG could reveal the type of poison, and this time I said the international journalists to spread the cause of death. Because if that particular timed poison put, this means extraordinary events, because many people in Papua, Papuan fighters in particular has died from being poisoned in a certain time period in order to eliminate traces of chemicals “, said Victor.

Indonesia tries to stop his burial in West Papua 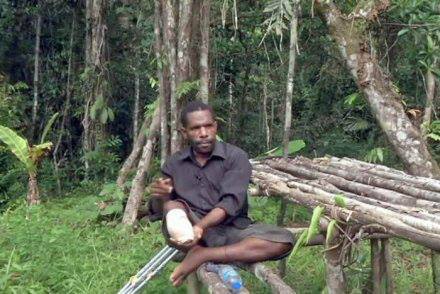 Also, Indonesia refused to allow his body to be buried in West Papua, even though he was at the time of his death technically (and unfortunately) an Indonesian citizen under Indonesian law.

It was decided to send Mr. Kogoya’s body back to Jayapura on route to his home as his leg was buried in West Papua. His family explained that according to Melanesian and Papuan customary law, it would not be fit to bury him elsewhere and since then his relatives and friends have started making the necessary arrangements for his body to be sent back.

Initially, after having been informed, the Indonesian authorities announced they would not co-operate and they would reject the body upon arrival at the border between the two countries. However, the PNG police which fully understood the traditional Melanesian implications of burying different parts of one same body in different places intervened and assured the relatives of Mr. Kogoya that they would escort the body up to the border and officially request for its transfer to the Indonesian authorities.

Another example of Indonesia’s tactics in West Papua

This is another clear, cowardly attempt by Indonesia to not only shoot and poison another Papuan leader but also to try and remove the proof of his death and even to try and not let him be buried in the country of his people.

The Free West Papua Campaign expresses our deepest sympathy with all family and friend of the late Commander Danny Kogoya and wish that his relatives may soon find true justice for the death of their family member.

We demand that Indonesia ceases all involvement and manipulation in the death of Mr. Kogoya and hope that the Papua New Guinean authorities are able to prove that he was indeed poisoned by the Indonesian regime which has shown its clear intent to try and cover up the evidence surrounding the death of this Papuan freedom fighter.

Rest in peace Commander Kogoya, one day you and your people will get true justice and freedom.