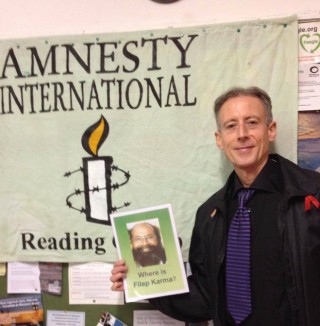 The UN has ruled that he is illegally detained, and he is considered a prisoner of conscience by Amnesty International.

The evening began with introductions from Reading Amnesty International to those attending about the situation of Filep Karma and that of West Papua as a whole.

The next speaker was International Human Rights Lawyer Melinda Janki who outlined the clear rights of Filep Karma to freedom and that his imprisonment was totally illegal and immoral under international law.

Free West Papua Campaign founder and himself formerly a fellow political prisoner, Benny Wenda then also gave a speech in which he described vividly the conditions he suffered behind Indonesian prison bars and how West Papuans are treated under Indonesian rule.

During an interval, West Papuan band made up of Papuan exiles living in the UK, The Lani Singers played traditional West Papuan music including a song about the scores of political prisoners in West Papua today.

After the interval, world famous human rights activist and staunch supporter of the people of West Papua, Peter Tatchell spoke at the event where he told of how he had been to visit the thousands of West Papuan refugees living in Papua New Guinea who told him first-hand accounts of massacres, bombings and torture. 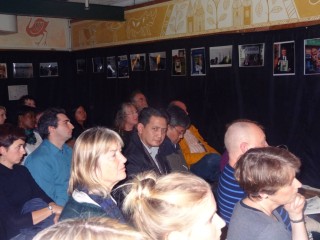 The Indonesian Ambassador to the UK was also invited to the event but declined to attend, instead sending a counsellor from the Embassy to act as a delegate.
The counsellor, Dino Kusnadi, was himself the former spokesperson for the Indonesian Embassy in Canberra, Australia.

He first asked Peter Tatchell how he considers West Papua to be not free and Peter promptly replied that there can be no freedom nor democracy in West Papua until all human rights abuses such as that of the incarceration of Filep Karma and a genuine act of self-determination is held in West Papua.

Benny Wenda also responded to Kusnadi’s comments by asking that if West Papua was free, firstly why was he, Benny Wenda here in the UK in the first place? He also asked the Indonesian counsellor how West Papua can be considered free when Filep Karma is still imprisoned and serving a 15 year jail sentence simply for raising his national flag.

He also pointed out the fact that Indonesia had no right to occupy West Papua in the first place so any talk of “autonomy” is meaningless anyway since all West Papuans want and need from Indonesia is independence.
Dino Kusandi refused to comment on why Indonesia occupied West Papua and did not even once mention Filep Karma.

He instead staged a lengthy attack on Benny, claiming he was a guilty man and that he only came to the UK to escape jail – (despite the fact that Interpol have removed the arrest warrant against Benny after an investigation concluded that the charges against him were politically motivated and an attempt by the Indonesian Government to silence him)

Benny pointed out these comments in response to Kusnadi and along with Peter Tatchell, received several rounds of applause and agreement from the entire crowd. 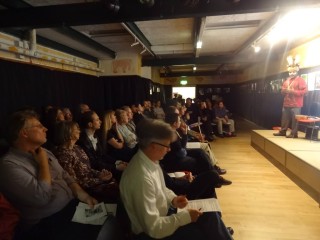 Benny Wenda speaking to the audience

Dino Kusnadi’s comments show once again that the Indonesian government is deeply worried about the ever growing awareness and support for the suffering people of West Papua and how the Indonesian Embassy in the UK is still prepared to launch outrageous accusations against peaceful activists just simply for speaking out about their basic right and freedom.

Filep’s daughter, scheduled to come to the event, denied visa to the UK

Filep’s daughter Audryne who is currently living in Indonesia, was invited by Amnesty International Reading to attend the event and very willing to come to the UK for this event and to speak the UK House of Lords as was also arranged but at the last moment, she was denied a visa by the British Government after suspected pressure from the Indonesian Embassy.

The Indonesian government is certainly closely watching all movement by West Papuans and within the Free West Papua Campaign with ever increasing suspicion and fear.

However, she did record a great video message for all of us at the event showing her support for the Evening. You can watch this video here

We would like to extend our warmest thanks to all those who attended this Amnesty Event and all those who continued to tirelessly support Papuan political prisoners such as Filep and the West Papuans who are still yearning for their freedom which is still denied to them by the government of Indonesia.
Also, special thanks should be paid to all the speakers, Sean, Malinda, Benny and Peter and also to Audryne Karma and her family for their incredible resilience and blessing for us all during this meeting.

It is by attending such events that we will continue to show support and raise awareness for Filep, his fellow political prisoners and all Papuans still suffering under Indonesian military rule.

Finally, we would like to thank Filep Karma, for his unending, strength and belief in a Free West Papua.
All our thoughts and prayers are with Filep and his people, one day they will get true freedom and justice.