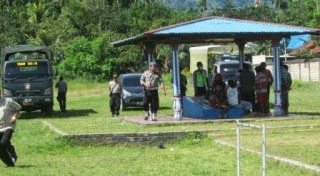 Armed police occupy positions on the route of the rally.

At the same time, demonstrations are to be held across West Papua both to celebrate the anniversary and to show appreciation for the Vanuatu government, whose Prime Minister raised the issue of West Papuan self-determination at the UN General Assembly in September of this year.

Sadly, the Indonesian police have already made clear their determination to block this legitimate expression of the West Papuan people. Not only have they denied the KNPB permission to hold their rallies, they have also occupied the planned route of the demonstration with 8 vehicles filled with military and police.

None of this will prevent my people from making their voices heard. I hope that the Indonesian government will allow them to express themselves; my worry, however, is that they will attempt a crackdown and arrest those participating. That is why I am calling on the world to keep a close eye on the events in my country tomorrow.