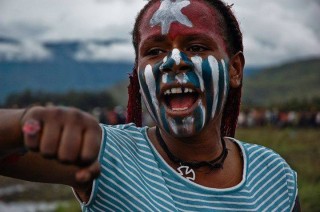 15 October 2012 – 98 international and Pacific non-governmental organisations, academics, politicians and individuals have written to the leaders of the Melanesian Spearhead Group (MSG), welcoming their leadership on the West Papua issue and adding their wholehearted support for the application of West Papua to join the MSG.

The group, including organisations from Fiji, New Zealand, Australia, Thailand, the Philippines, India and the USA highlighted the threat to the survival of the indigenous Melanesians of West Papua, whose population is rapidly declining, and the ongoing human rights abuses in the disputed territory, including the denial of the right to self-determination.

The letter was written in solidarity with the thousands of West Papuans who have demonstrated over the last year calling for support from their Melanesian neighbours to acknowledge their suffering and have their Melanesian identity recognised through being granted membership of the MSG. Many of these peaceful demonstrations have been met with beatings and arrests.

West Papua borders the independent state of Papua New Guinea and is geographically and culturally part of Melanesia. Indonesia entered the territory in the 1960s and there followed over a decade of indiscriminate attacks on civilians using aerial bombardment, strafing, and mortar and artillery fire from air, land and sea. These indiscriminate attacks formed the context for the ‘Act of Free Choice,’ which is widely agreed to have been fraudulent. The problematic plebiscite afforded a vote to only around 1% of the Papuan population at the time, while Indonesian troops intimidated those voters and brutally suppressed the protesting indigenous population. As a result, Indonesia consolidated its control of West Papua.

Human rights abuses continue to this day. During the last year there have been hundreds of political arrests, dozens of reports of torture of indigenous people, and killings by Indonesian security forces, including the shooting of an 11-year-old West Papua girl.