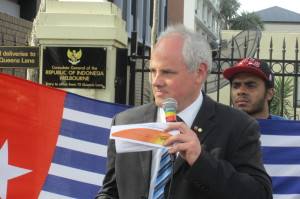 Senator John Madigan speaks out in support of West Papua.

The issue of West Papua continues to rise up the agenda in Australia. The recent Freedom Flotilla which sailed from Australian to West Papuan shores caught the media attention while three activists climbed into the Australian consulate in Bali seeking refuge. Sadly the Australian government is trying to pretend that there is nothing to be concerned about and Prime Minister Tony Abbott insists that his government will do all they can to prevent West Papuans and their supporters “grandstanding” in support of West Papua.  In response to all this two Australian Senators have demanded real action on West Papua from their government.

Senator John Madigan spoke out saying: “It is about time our government had the courage to stand up to Indonesia, instead of ignoring the issue of West Papuan oppression and the human rights abuses that occur there on a daily basis.” You can read his full statement here.

Senator Richard Di Natale also released a statement today stating: “The Australian Greens and human rights groups have long advocated for free access by the media to West Papua and for the release of political prisoners. The Abbott Government must take a stand and do the same.” You can read his full statement here.

For an excellent analysis of the current Australian stance on West Papua we highly recommend this article by Jason McLeod and this article in Al Jazeera.