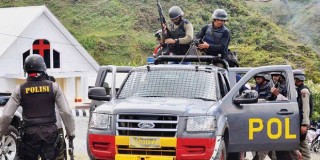 We have some very shocking and tragic news to report from West Papua. An innocent West Papuan man, Alpius Mote (20) was shot dead on Monday 23rd September in Waghete village in the Deiyei regency of West Papua.

Father Santon Tekege, a Catholic brother testified to the Guardian newspaper that the victims were targeted because they refused to cut their long hair and beards during a random police search operation.

Tekege told Guardian Australia that the Indonesian police’s mobile brigade (Brimob) was carrying out a “sweeping” operation at the local market on Monday when the incident occurred.

“Brimob had scissors to cut people’s long hair and beards,” Tekege said. “The police always stigmatise those with long hair, dreadlocks and long beards as being separatists.”

The Indonesian police were also sweeping for nokens (traditional string bags) that had designs of the Morning Star flag or had ‘Papua’ written on them. Mobile phones were also confiscated and Brimob were checking the songs on them.

This is typical behaviour of many Indonesian police operations in West Papua, during the last few years, women have been arrested for making these Morning Star Flag bags and people targeted for having any West Papuan or Papua New Guinean songs downloaded.

Benny Giay, the moderator of West Papua’s Kingmi Church who has family in Waghete, told Guardian Australia from Jayapura: “The Indonesian authorities think that Papuans who have long hair are uncivilised so they go around with big scissors and try to cut their hair. The man who was killed [on Monday] tried to raise his objections and he got shot.”

This heinous crime against humanity is a blatant violation of human rights by the Indonesian police in occupied West Papua. It is another clear and brutal example of the systematic genocide and ethnic cleansing of the West Papuan people, being carried out to this day by the Indonesian military and police. 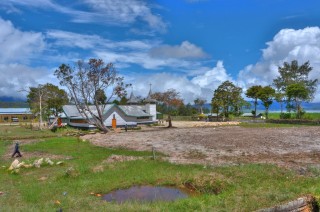 It is in ways such as this that the Indonesian police and military in West Papua show their clear intent to wipe the West Papuan people, their identity and culture of the face of the Earth. The Indonesian security forces are committing genocide in Indonesian occupied West Papua and Alpius Mote was just one of the now more than 500,000 innocent West Papuan men, women and children who have been murdered by the Indonesian military and police since the nation of West Papua was invaded by Indonesia in 1963. 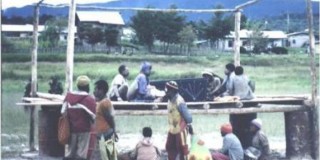 The coffin of Alpius Mote.

We fully condemn this brutal murder and shootings and demand that justice be shown to both the victims’ families and to the Indonesian police responsible on all levels. Such atrocities will only cease in a West Papua which is completely free from Indonesian police and soldiers and fully independent as an individual nation. We call upon all peoples and governments to raise your voice to help to stop such brutal atrocities and to allow the West Papuan people their rights to self-determination.

Urgent action needed- How you can help

Please call or text (SMS) the Head of the Indonesian police in West Papua Tito Karnavia: on +62811161777 and demand in English or Indonesian that he immediately cease such blatant cold blooded murders and all human rights atrocities by his police in illegally Indonesian occupied West Papua.