We are very pleased to present a personal report from Jeremy Bally who is cycling across the UK and on into the Netherlands as he continues pedalling for Papua.

The Journey Until Now

After an overnight ferry from Harwitch to the Hook of Holland, Pedalling for Papua has arrived in The Netherlands.

Canada was for three months. It was long and full of mountains, prairies and lakes.

The USA was for three weeks. It was brief and full of cities, people and life.

Ireland and The United Kingdom was for three weeks, too. It was new and full of kind exuberance, foggy country, and easy hospitality. It was also full of support.

Benny Wenda and the Free West Papua campaign have long been an inspiration for me. Having concocted the framework for the Pedalling for Papua campaign almost 4 years ago now, I’ve spent much of that time searching out similar campaigns – projects that could give me some frame of reference for how to tell this crucial story on a large scale. So how could I pass up the opportunity to meet the man himself, whose tireless campaigning has caught the attention of international media and even the influential TED community? Everyone I’d spoken with about Benny before this said he does something to people – that it’s hard to meet the man and not get involved. Well, I’m already involved, but after 4 months on the road and 40 or so awareness raising events about West Papua, the passion I felt from him and his beautiful family was exactly the infusion I needed to keep pedalling forward. 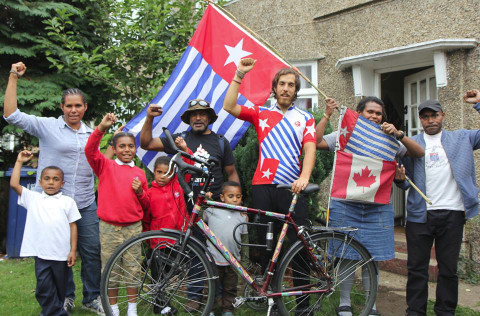 West Papua and it’s people have been the unwilling hosts to a 50 year old conflict that at turns is called, slow-burning, colonial, genocidal and (perhaps most disturbingly) non-existent. Human suffering at the hands of ignorance and greed, which is the most concise way I can describe the situation there, is and always will be reason enough for concerned citizens to intervene, as best as they know how. For me, however, it is the constant act of sweeping these people and their struggle under the rug that demands the most vigorous response. Stories live to be told and shared and grown and resolved. There’s a lot that needs to be achieved between now and the time when West Papua can truly be called a land of peace, but when this indigenous people’s struggle first came to me through a friend back in 2009, my storytellers instinct got pricked.

One of the world’s most biologically and culturally diverse regions. 50 years of a secret war. A long ignored and ever changing struggle for freedom. I’ve been either planning or Pedalling for Papua ever since. How could I not?

After 4 months I have given around 30 multimedia presentations through 4 countries about West Papua. Based on recorded interviews I conducted over Skype with West Papuans living around the world, the presentation is an arts-based approach to talking about not only the violence that has plagued this region, but also it‘s cultural and ecological heritage and value. The story there is long and complex, and I believe that it is only in honoring it’s sacred details and setting that we (as a growing number of international activists) can help reclaim justice for the West Papuan people.

The Netherlands has been for two days. So far, it is flat and full of friends (and bicycles!)

I’m staying here with Oridek Ap and his family. Spending time with the children and grandchildren of Arnold Ap, one of West Papua’s most legendary and influential figures, is another blast of reinvigoration. Last night, I was welcomed with a community of West Papuans and a feast. Throughout the whole meal we played music together. The spirit was rich, the food fulfilling, and the hope palpable.

Pedalling for Papua will continue for another 2 months, moving through the Netherlands, New Zealand and Australia before I (think I) head back home to Canada. The suggestion has been made, however, that I go and seek this deep spirit in it’s home, and finish with a floury (and possibly an arrest) in West Papua itself. That is still a big question mark, but I’m open to (and hoping for) helpful feedback from this community.

For now, however, I’m off to spend the day singing songs, riding bikes and telling stories with part of the large West Papuan community in the Netherlands. Thank goodness for this wonderful, flat country.

Jeremy and the Pedalling for Papua team.