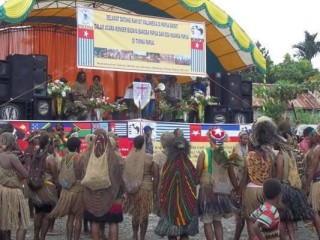 On 15th August 2013, in rejection of the so called “New York Agreement”, in support of West Papua joining the Melanesian Spearhead Group and in support of the new Free West Papua Campaign office opening in the Netherlands, mass Cultural Parade rallies were held all over West Papua and throughout Indonesia.

Despite the police ban on the demonstrations and heavy police presence, including tanks, demonstrations went ahead peacefully in Nabire, Timika, Jayapura, Biak and Jakarta.

PAULA MAKABORY: And in fact even though eight people were arrested on the preparations for the rally yesterday before on the 13th August but yesterday they keep doing the rally and also some students from AMP organisations and KNPB were together they did the rally as well in the city of Java.

JOHNNY BLADES: So it sounds like there wasn’t an excessive response from the security forces? 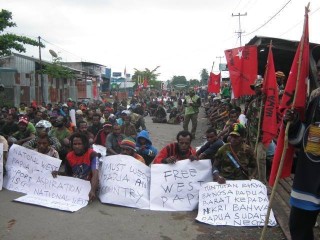 PM: Yeah I think there is no shooting and they didn’t stop the rally even though the police banned it so the main point is you can see how strong the West Papuan would like to stand up to spread the message out here and their rights, especially the right to self-determination. They all stand up also for the same message to support the opening office of the Free West Papuan movement in the Hague, in the Netherlands.

JB: And do you think that the Indonesian security forces are becoming a bit more reasonable in their approach, in their response to these sorts of occasions?

PM: I think after Indonesia being criticised at the UN critical reviews of the Human Rights Committee this is like a positive attitude, while really on the ground, you cannot control them. So for me you cannot say yes or no to these situations because they can do anything anywhere anytime to the West Papuan.

JB: There’s a cultural element to a lot of these demonstrations in that they are displaying their Melanesia roots. 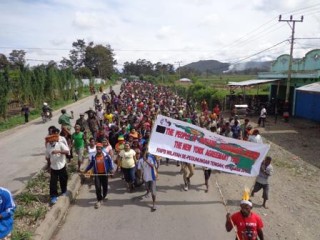 PM: Yeah I think the message is quite strong and especially it was done yesterday in memory of that New York Agreement back in the 15th of August 1962 where I think the claims of the West Papuan there is really strong which is they would like to know the legality of this agreement. Then the legality of the Act Of Free Choice back in 1969 and the legality of the Freeport McMoRan deal even before the Act Of Free Choice took place. And here on this ground in West Papua with all the cultural rallies yesterday with the strong support and calling for the right to self-determination of the West Papuan they would like to show the whole region of Pacific Islands or Melanesian countries and the world that they still don’t think that they belong under Indonesian rule.

For many more photos from the rallies and links to other news stories pleas visit our facebook page.