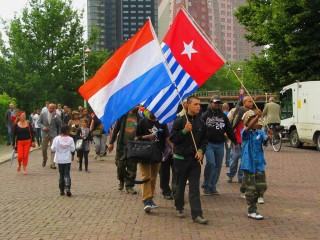 On August 15th 2013, we opened a new office in The Hague, Netherlands. Scores of people attended this historical day, another very important step on the road to West Papuan self-determination and independence.
Through this office and other branches throughout the world, we will continue to educate and inform the international community so that all will be able to understand why the West Papuan people are crying for freedom from Indonesian colonialism.We will continue to struggle on against the illegal occupation, suffering and genocide of West Papua by the Indonesian military and security forces. 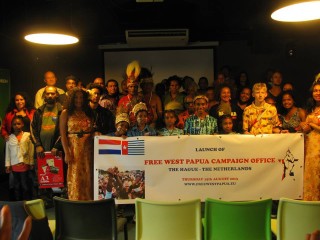 This office is at the heart of the very struggle itself where the West Papuan international freedom campaign started exactly 51 years ago in The Hague when the Dutch government signed the so called “New York Agreement” under pressure from the USA and Indonesia and therefore the nation of West Papua was illegally occupied by Indonesia and the international struggle against this colonialism was born.

At the opening Benny Wenda, founder of the Free West Papua Campaign gave the following speech:

Good afternoon honoured guests, fellow Papuans, Ladies and Gentlemen. I want to thank you all. All our friends, activists, politicians, lawyers, families and individual supporters who tirelessly work for freedom and self-determination for the people West Papua.

Today is another historical day to recognise the West Papuan peoples struggle for independence. 51 years ago today our international freedom campaign started here in The Hague when the government of the Netherlands allowed Indonesia to occupy and colonise West Papua. Today we remember a day of broken promise on the 15th of August 1962 and the signing of the so called “New York Agreement” by the Governments of the Netherlands, Indonesia and the USA without any consultation from any Papuans to decide our future. By this agreement we the people of West Papua were denied our fundamental rights to self-determination under International law. This might be seen to some as just history, but to all West Papuans, we see this day as the beginning of all our continued suffering, illegal occupation and genocide still to this day being committed against the people of West Papua by the Indonesian military and security forces. Ever since this day 51 years ago, we have struggled for our right to Independence which was violated during this Agreement. 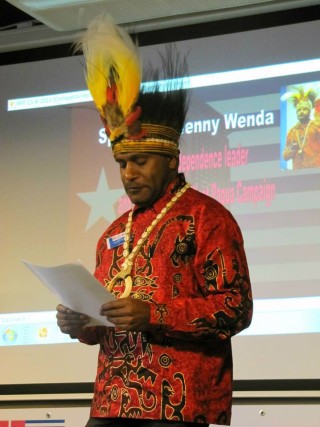 We are officially launching this Netherlands Free West Papua Campaign office as part this now global struggle to achieve West Papuan independence from Indonesian colonialism. From this office and other branches throughout the world we will work to educate the international Community, nation by nation, continent by continent, parliament by parliament, lawyer by lawyer and therefore, also the United Nations. We will educate and inform the public so that all will be able to understand why West Papua is crying for freedom, justice and independence.

Today we are opening this office here in the Netherlands because this Campaign to Free West Papua is gathering strength and momentum, but without your support nothing will ever change and the killing will only continue in West Papua.

We have made great progress in the last few years but we need to do more. We really need your support…. politically, financially and morally to run this campaign.

Today with the opening of this new office, here in the Netherlands, I am calling for all West Papuans and all West Papuan organisations to now become one united voice to work together for the national agenda for self-determination and independence.

Thank you very much on Behalf of the Free West Papua Campaign and all West Papuans wherever they are in the world. Thank you for coming to witnesses this historical official opening of the Netherland’s FWPC office.