This article contains distressing images but it is precisely because of incidents such as this that makes it crucial  for the world to know what is really happening in West Papua.

An innocent West Papuan man was shot dead by the Indonesian police today at 9:30 in Mimika. This follows less than one week after the shooting by police of Irwan Wenda.

Andreas Joani, (37) left his house at 9:30 in the morning and without any warning or apparent reason, 6 members of the Indonesian police chased him down the street and shot him several times in the chest. 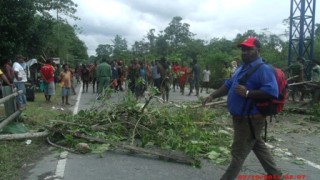 Papuans block the road following the shooting of Andreas

Papuan activists and friends blocked the Indonesian police chief in West Papua, Tito Karvian before he too could access the scene. Police are supposed to be guardians, protectors and servants of the people but in West Papua they are the offenders, destroyers, shooters and murderers of the people of Papua.

Please call or text (SMS) the Head of the Indonesian police in West Papua Tito Karnavia: on +62811161777 and demand in English or Bahasa that he immediately cease such blatant cold blooded murders and all human rights atrocities by his police in illegally Indonesian occupied West Papua. Mention the name Andreas Joani 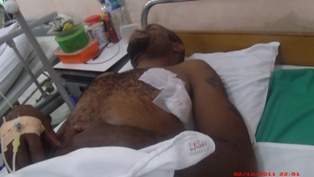 Andreas Joani’s body at the hospital