Papuans continue to oppose corporate takeover of their lands

UPDATE, 12th August: Around 100 people from the SSUMAWOMA Malind Woyu Maklew Intellectual Forum are currently occupying PT Mayora and PT Astra’s company offices in Merauke City. Their demand is that the two companies stop their operations and drop their investment plans for sugar-cane plantations in Okaba, Ngguti, Tubang and Ilwayab. For more information see here.

A number of very informative reports have recently been posted at the awas MIFEE website detailing West Papuan’s resistance to the corporate takeover of their land. We briefly summarise some of the reports here and link to the original articles for more information.

PT. Mayora is one of Indonesia’s leading food brands, which is trying to take over West Papuan land for growing giant sugar cane plantations. They are increasingly encroaching on West Papuan villages in co-operation with the Indonesian government to oust Papuans off of their land to make way for more agribusiness.

In this video, Yowid Villagers from Tubang District – Merauke. testify that after rejecting the presence of PT. Mayora, on thier customary land, they were branded as “OPM/separatists” by the Indonesian police and the company. The police (who work as armed guards for the company) immediately claimed that villagers were storing weapons in their traditional houses and that they were OPM.

Knowing that any village branded OPM by the Indonesian state might be destroyed with everyone killed, the village leaders had no option but to sign their land away in a document to the company so that they would no longer face an assault of their village for being branded as “separatists”.

This is another clear example of the Indonesian police working hand in hand with multinational corporations to force West Papuans off of their land to make way for further resource exploitation, only adding to the genocide and illegal occupation of West Papua by Indonesia. 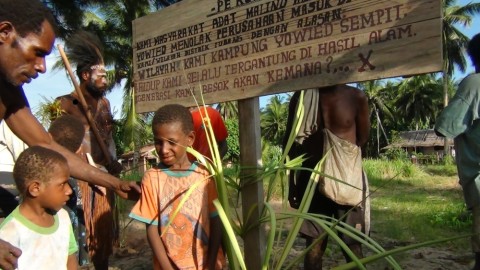 Yowid village tribespeople in the Merauke region of West Papua making their opposition to plantations clear, earlier this year.

In a press release sent to Majalah Selangkah, Solidarity with Yenbekaki explains the reasons for their opposition. They write in the press release how the people feel that PT ASP’s prescence is unlawful and violates the rights of indigenous people in Kampung Yenbekaki. PT ASP’s activities also pose a grave threat for the beaches of Warebar, a coastal conservation zone where critically endangered leatherback turtles lay their eggs.

The indigenous people of Kampung Yenbekaki are also asking the government to press PT ASP to leave the Yenbekaki area, because it doesn’t fit with Raja Ampat’s vision and objectives as a regency based on marine life.

“Guarantees that the company will give compensation to the community remain sweet promises which have never come to fruition,” is one of Solidarity with Yenbekaki’s claims.

The people of Yenbekaki feel that PT ASP’s presence is a threat to an ecosystem which is rich in wildlife, most notably the leatherback turtles on Warebar Beach near Kampung Yenbekaki. It will also make it harder for people find the resources they need for their livelihoods, and so work will become more of a burden for people.

On 1st June 2013, the people of Kampung Yenbekaki took action against the company, blockading their office in the village, to demand that the company immediately stops exploration and drilling activities around Sarembon and Yenbekaki.

“This blockade took place because we believe that PT ASP has absolutely no regard for the rights of indigenous people, doesn’t respect the environment and is endangering the future of communities around the mine by excavating the riches of the Yenbekaki community,” Solidarity with Yenbekaki writes.

Currently, PT ASP has yet to leave the area. As for its waste, of course it keeps on endangering the environment and the Papuan people of Yenbekaki. 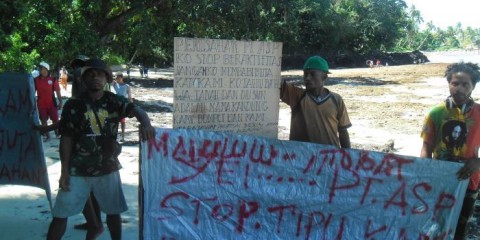 Malind Women share their views about Companies Operating in Merauke

All three of these companies have made various kinds of promises and approaches as part of their attempts to get their hands on forest and swamp lands between the Kumb and Maro rivers: an area of 73,000 hectares in all. The majority of this land is around Kampung Baad and Kampung Tambat, two villages settled by Marind people belonging to the Baad tribe.

PT ARN has even brought traditional leaders from Kampung Baad on a trip to Lampung and West Sumatra provinces to visit sugar and oil palm plantations, supposedly so they could make comparisons. But still the people have not wavered in their refusal to give up their land. 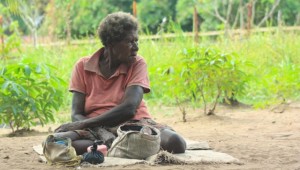 The women of Kampung Baad, or “mama-mama”, who are often only spectators in the process of negotiations about the land, also want to add their voice to the debate. A short selection of a group discussion with Christina Gebze and the other mama-mama of Kampung Baad can be read here.